RACING TO WIN: THE REVIEW 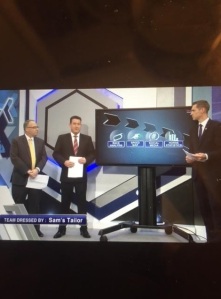 It opens with a montage of graphics that recall such great television moments as “Thunderbirds Are Go” and “Knight Rider” over what sounds like a James Last version of “Band On The Run” before host Andrew Le Jeune, below. appears as usual to let audiences know what’s in store if one is Racing To Win, the HKJC production that just won’t go away. It’s been in Hong Kong for almost four decades and since when that doyen of horse racing Jim McGrath was a young pup. 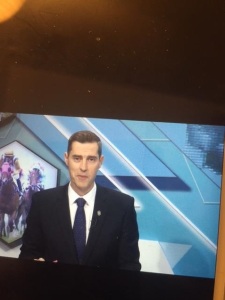 It’s a tried and true format in television programming for horse racing, and if the wheel ain’t broke, why send it to the glue factory? Plus, new hosts and panels can always make a world of vive le difference. 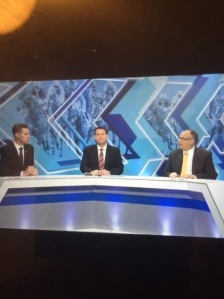 Andrew Le Jeune- even the name screams out class, style and royalty- has an authoritative voice and commanding presence. He’s a tad like horse racing’s answer to Prince Charles and Michael Parkinson- urbane, smooth, and slick though this can quickly change to something bordering on the spooky. This usually happens when watching RTW on one’s mobile phone and buffering occurs resulting in a freeze frame of the host’s face with his mouth open. But let’s not dwell on trivialities. 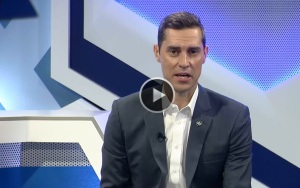 There’s a certain amount of depth to this tale of three ordinary men from different parts of the world- Andrew Le Jeune, Brett Davis and Paul “Foodie” Lally- brought together and plonked down in a setting resembling a space craft that once belonged to Captain Kirk to discuss the races being held the next day. 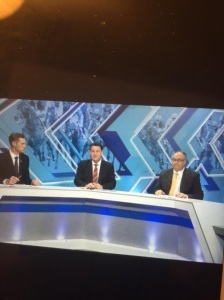 It’s riveting stuff to watch, listen and ponder over as these guides go back to the future to show past horse races and draw circles around many of the runners. There are lots of footage of horses galloping over some frenetic instrumental music apparently created by someone at the HKJC with a drum machine and the showing of many charts before Brett Davis and Paul Lally finally bung in their favourite numbers. Andrew Le Jeune never talks numbers. He might natter something under his breath, but he leaves this part of the puzzle for race caller Davis and form analyst The Lally Man, below, to solve. 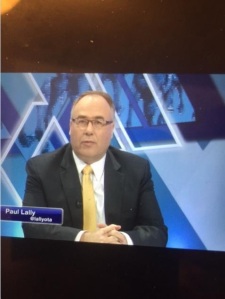 Davis, below. meanwhile, keeps things moving at a steady clip whereas The Lally Man gives the impression that he’d rather be at an Argentinian steakhouse biting into a big juicy one washed down with a decent bottle of red. 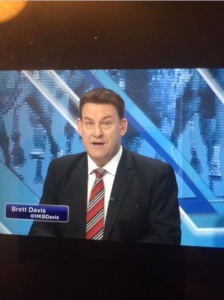 Lally is almost the anti hero of the show- nonchalant with almost a sneer appearing when Brett Davis reads out his numbers. It’s as if to say, “What a loada old bollocks.” 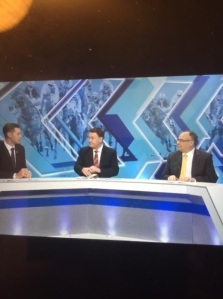 It’s television at its most tense. One almost expects The Lally Man to explode and have a Howard Beale Moment. This never happens, however, as the director tempers the situation by having young Edward Sadler, below, conduct a few interviews with trainers and jockeys. 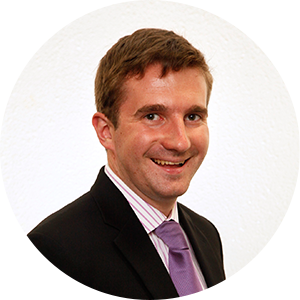 Joao Moreira always comes across as an excited chihuahua and believes every one of his horses can win. Olé to that. Zac Purton looks pensive and distant and talks in riddles while most of the others say something or another that’s neither here nor there. It’s a buffet of riddles for viewers to figure out. The takeaway is that everyone is trying.

Deep and thought provoking though all this might be, the production does go on for what seems like the entire works of Pink Floyd as one has to leave the Multimedia Section after the discussion of each race and then return to watch the next race. It doesn’t flow as a programme in its entirety- at least not on mobile phones.

This can be draining though regular viewers tell us that they simply fast forward everything to just see the numbers presented at the end and just skip all the discussions about each race. That’s cheating, but hey… 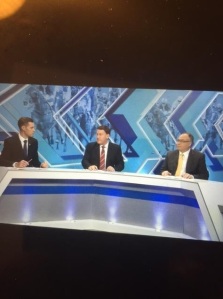 When there are eleven races, viewing time can seem as long as Once Upon A Time In The West, but without director Sergio Leone’s long lingering shots on faces and eyes.

A personal highlight is when half way through all the race to winnings, things seem to chill when Paul Lally, appears to suffer from either fatigue or a splitting headache and goes to have a little lie down on a sofa. One can’t help but wonder what’s going through The Lally Man’s head. Probably a steak at Pampas. And if the photo below is anything to go by, the need for a dry suit.

Meanwhile, Andrew Le Jeune and Brett Davis stretch their legs and are suddenly standing next to a touch screen and move horses around to show what the speed map might look like. The Lally Man occasionally looks on. 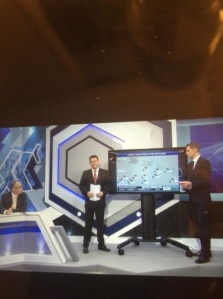 It’s cerebral stuff that just could be lost on many. It’s a WTF Moment saved only by showing off the nice dark suits from Sam The Tailor and when the Lally Man is woken up to ask his opinion about the speed map. “Yeah, that’s about right”, he calls out from the sofa before more numbers appear and The League Of Gentlemen return seated down though we never see them walking back to their seats. The magic of special effects.

The show ends with some stats and Best Bets and jockeys against blue screen striding manfully to camera- hnmmmm, not sure about Dylan Mo’s purposeful stride- and striking various poses. 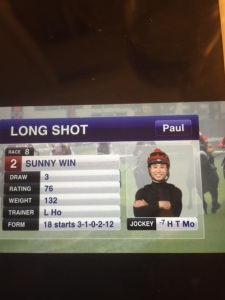 One almost expects to hear “Vogue” by Madonna over this footage, but, alas, this never happens. What does happen is a cheery goodbye and, though dead, James Last strikes up the orchestra and “Band On The Run” is reprised. 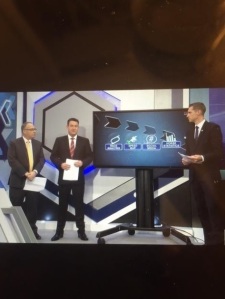 RTW is not exactly compulsory viewing, but for those who enjoy their television fare simple yet deep and almost an homage to Morecambe and Wise and The Ying Tong Song, it’s certain to please.