It’s needed a little time to absorb it all. From a business point of view, the Hong Kong International races on Sunday at Sha Tin was a massive success- turnover of over HK$1.6 billion, combined attendance at Sha Tin and cross-betting at Happy Valley reaching over 94,000 and a record HK$194 million in commingled betting from around the world.

There were the winners and those who weren’t so lucky, but above it all, the Longines Hong Kong International Races showed a side to horse racing not always seen: its heart. Its ability to give without asking.

Did the HKJC give racing fans a return on their time and investment? Definitely. And more, especially at a time when it’s becoming increasingly difficult to know what the consumer wants as we’re living in a world of such constant change. For example, friends in the hospitality trade and owning restaurants, bars and clubs worry about how their businesses will do from day to day. Why? Choice.

There’s a buffet of consumer choices out there, not just in Hong Kong, but around the world. This means needing to constantly keep reinventing one’s product. The same goes for fashion, music and every leisure activity. It’s tough out there.

Racing at Sha Tin at Sunday had it all- it might have even reinvented itself in the process, or else seen a few new ways in which this game of chance can at least be presented by understanding that everyone is not the same. One size doesn’t fit all.

Being very much a “Hong Kong boy” at heart, it was hugely satisfying to see local riders Derek Leung and apprentice Dylan Mo star for such a huge worldwide audience on the most important day of the Hong Kong racing calendar.

Their wins might not have meant much to many of the overseas visitors, but when the extremely popular Derek Leung won the Group 1 Hong Kong Mile with a very clever front running display on Beauty Generation, this had the crowd on their feet and cheering with their hearts. It was a Made In Hong Kong moment full of pride, something quite rare in these cynical times.

This season has seen Derek Leung come of age. The now senior rider who’s always been described as having the potential to be a local writer with the ability to succeed overseas since his days as a young apprentice is finally showing that this wasn’t hyperbole.

While many local riders have hit the ground running and had the racing media over-excitedly describe them as being the next best thing to chow fan, but only to falter through injuries, suspensions and losing their mojo along the way, Derek Leung has almost gone back to the drawing board and reinvented himself into a new, improved model. He oozes confidence.

With fatherhood for the first time around the corner, he’s taken on new responsibilities including going all out to be the best he can be along with being a great ambassador for Hong Kong racing. During the off season, there’s word of him receiving a wonderful opportunity to further his skills overseas.

Thanks to the support of trainer John Moore, son George Moore and young owner Patrick Kwok, he’s combined with Beauty Generation for three memorable wins which will be seen by many as one of the highlights of this season. The photo below taken by my friend Wallace Wan says it all- and how much his first Group 1 win means to Hong Kong, the HKJC and its CEO.

Read Derek’s Facebook page and one sees just how much he appreciates the opportunity he received to win on Beauty Generation. All credit to the connections of the galloper for thinking global and acting local by believing in and sticking by this Hong Kong-born rider. If the wheel ain’t broke… 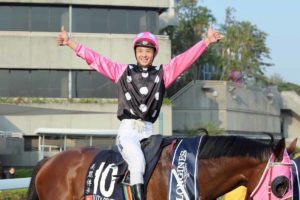 As for Dylan Mo, let’s face it, there was a time not that long ago when his name was the punchline to many jokes in Cantonese. Simply put, he wasn’t only weak and not showing much riding talent, he was a hazard to many senior riders during a race. And then when Matthew Poon aka The Poon Train steamed into town after a great run of success in Adelaide and was seen to be The Next Big Thing, everyone jumped on the bandwagon. 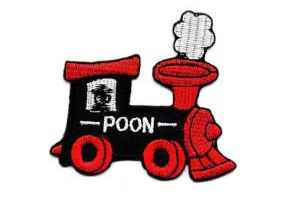 For the first few months, it was all about the hustle and bustle and tremendous will to win and success of The Poon Train. But exuberance has its pitfalls and, at least for the time being, the winning run of Matthew Poon seems to have stalled. Suspensions might have slightly derailed The Poon Train, but don’t worry- Matthew Poon will soon be back on track. And amongst the winners. The kid is no quitter.

Whether it’s seeing his main rival in the riding ranks slow down, or the great former South African jockey Felix Coetzee, below with the young rider and trainer Danny Shum to whose stable he’s indentured, who’s in charge of mentoring the local apprentices having worked the oracle with him, a far more confident Dylan Mo has suddenly come out with all guns blazing.

Gone is all hesitation. The bullets are no longer blanks. They’re hitting their mark. 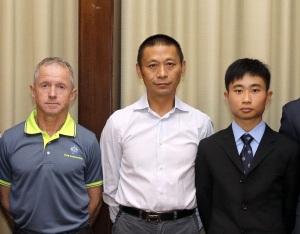 Today, Dylan Mo is in demand by many stables, and, perhaps more importantly, he has won the support of Hong Kong racing’s original local hero- Tony Cruz- not an easy thing to do. 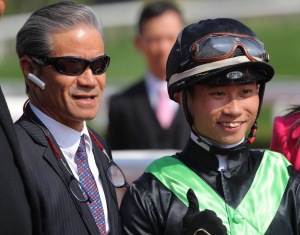 The former champion jockey who’s taken on and beaten the best in the world when riding in the UK and Europe, Tony Cruz is a tough taskmaster. He marches to the beat of his own drum and doesn’t suffer fools gladly. He’s also always been there to give local riders opportunities. Dylan Mo’s two wins for the trainer on this big day has probably cemented a longer term relationship with the stable and time will tell how this develops. 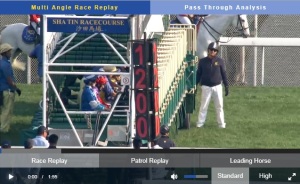 What didn’t escape those who know their Hong Kong racing history was seeing Dylan Mo winning on Key Witness wearing those familiar green and black silks once carried by the great Silent Witness, the one-time champion Hong Kong sprinter. The photograph below with owners Archie and Betty Da Silva and Pauline Cruz can’t help but bring back memories when Silent Witness ruled the turf. And who was always on his back? Felix Coetzee. Talk about the circle of life. 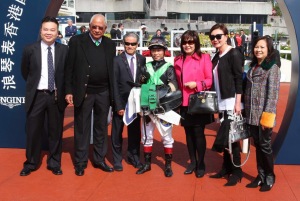 Away from the two local heroes- three when one counts Tony Cruz and his ninth International Cup win as a trainer- what more can one say that’s been said before about the winning ride of Ryan Moore in the Hong Kong Vase and his complete understanding of the Aidan O’BrIen trained Highland Reel? 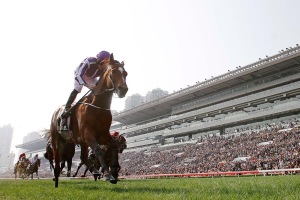 It was a fitting farewell to a horse that simply refuses to lose. Before race caller Brett Davis told audiences that “Irish eyes are smiling” when the galloper had the race sewn up, one would have thought that Highland Reel was going down to the lowlands. He looked to be struggling and seemed to have run its race. But Ryan Moore knew what he had under him. When he pressed that auxiliary button, Highland Reel found another gear and the Hong Kong Vase was his. He rightfully bowed out a champion and the normally reserved Ryan Moore might have even shown a touch of emotion when talking about this very special horse after the race.

In the Hong Kong Sprint, it was fitting to see Nash Rawiller win on the John Size-trained and Joao Moreira discard Mr Stunning. Even magic men sometimes pull the wrong rabbit out of the hat. For the Australian rider, this was an important win. The popular rider’s father- “Keithy”- was here to see it along with son Cam who played such an important role in getting his dad the ride.

For The Gnasher, the win was a fitting moment after giving his everything to succeed in Hong Kong despite a series of suspensions for careless riding during his early days here, and then having to make a long and slow return to racing after a horrific fall which badly injured his shoulder. Some wondered if that comeback would be a successful one. But family is often the greatest medicine and support system. And young Campbell Rawiller has shown how often child is father to the man.

Zac Purton gave a flawless display with a superb ride to take out the Hong Kong Cup on Time Warp. No matter what anyone says, Purton outrode those seemingly happy to just watch the backside of Time Warp. The riding instructions given by trainer Tony Cruz: “Just chill, man”. 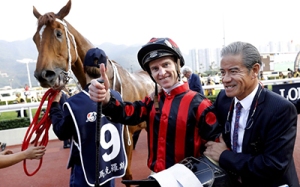 All this made for a superb world class racing product with something for everyone and first starter Lockheed sending out warning signals to its rivals in next year’s Hong Kong Derby. But there was something else- something which showed that other than the hard yell of punting, there’s a heart sell to horse racing. It’s something that really should be displayed more.

Here, it had to do with Jose, the groom travelling with the American runner in the Hong Kong Sprint Stormy Liberal. Jose lost everything- all his possessions- in the savage fires that swept through San Luis Rey in California for days destroying many properties and killing hundreds of horses.

To help Jose and his family, the HKJC gave him a gift of US$10,000. In the quarantine stables, the visiting stable staff also took up a collection and matched this figure. It doesn’t end here. Two jockeys who prefer to remain anonymous have also helped out financially as have a few others involved in horse racing in one way or another.

It might seem a small gesture. But a number of small gestures like these help create a very different picture of horse racing- a big picture of camaraderie, and how, in the end, win, lose or draw, it’s all about caring and being there for those needing help.

Man never made anything as resilient as the human spirit.