FASHIONISTAS: THE EVOLUTION OF THE HAPPY WEDNESDAY BRAND CONTINUES…

First there was the Beer Garden. Of course, before everything, there was Happy Valley racecourse and the horse racing, but that Beer Garden became an oasis- a magnet for food, fun and thundering hooves that brought people together. It transformed the face of racing. It put a smile on its face and got rid of the wrinkles. 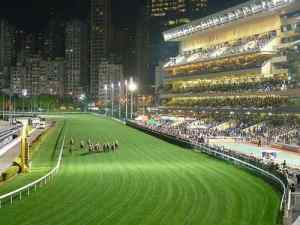 As people needed something more to occupy their time between those twentysomething minutes between the races, there was the added attraction of ‘live’ music. Horse racing suddenly became more entertaining.

Then came other venues like the slightly more upmarket Adrenaline and more ‘live’ music along with a truly international melting pot of people- younger, fun, creative and stylish people interacting with each other and who have become part of the Happy Wednesday on-course and online community.

For those musicians lucky enough to perform here, they have two of the best platforms in Hong Kong to showcase their talents to a huge audience with some having gone on to record their music purely because of this gig. But one really doubts it’s going to end here.

The Hong Kong music scene desperately needs a massive boost. A facelift. And just as new talent has been launched at the Beer Garden and Adrenaline, we’re willing to bet that other new names will come onboard- from Hong Kong and abroad. As Kel, who sings at with the band at Adrenaline, sings below, one has gotta keep on moving on…

This is a new generation of racing fans who might not know a Treble from a Double Cheeseburger, but know Zac and Joao and Karis and Sammy and Chad and the other stars of the show- and follow their favourites just as they support the various themed promotions throughout the racing season.

It’s really been about learning about horse racing in their own way and in their own time. And by bringing these star attractions up close and personal, there really has been a customercentric paradigm shift in what is increasingly becoming a DIY world.

No millennial wants to become another brick in the wall and meekly accept the bones thrown their way. A Happy Wednesday is largely for this new market segment who wish to accept horse racing on their terms. The Hong Kong Jockey Club has given them the tools to work out what they want and when and how to use them. It’s now up to them as to who they want to come along for the ride.

Now into the mix comes something new: the search for the Happy Wednesday Fashionistas- those with style, sure, but also with an attitude and that extra edge.

The search began just a month ago, and the winner for September was someone we call Mr Attitude. He has plenty of it.

With Hong Kong being so style conscious and always wanting to be part of whatever is fashionable, one is willing to bet that Happy Wednesday Fashionistas will evolve into something much more- on course, online and be part of a creative community that will showcase the new and vibrant Hong Kong.

Who would have thought all this would have its kickstart at a racecourse?

Have a Happy Wednesday!