PETER V’LANDYS AND HORSE RACING’S OWN GAME OF THRONES

It’s taken a long and winding whirlybird route to get to where it is now. From being a copy of America’s Pegasus race, and through numerous changes that continue today, Peter V’landys, the Racing NSW supremo, honorary Sherpa, and Sir Edmund Hillary of Australian racing, has made his (?) Everest race a slot machine reality. We must applaud this effort. We’ll also gladly eat humble pie along with our initial cynicism and suspicion about the race. Wait: the cynicism remains.

Though The Everest, where the goalposts are constantly being moved, and, to some. still has more holes attached it than a spin wheel dryer in a Macau-based Chinese laundromat, the race will attempt to scale lofty new heights with the end result- a three year climb- definitely going to be interesting as The Man Who Would Be King continues his Long March to control all of racing in the land down under.

Hell, there’s no longer even Simon Love, the former tough-talking CEO of the VRC, standing in his way anymore. To his credit, only Matt Stewart of the Herald Sun, below, is asking the hard questions- and being pilloried in some quarters for doing so. Not right.

What should not be brushed under the carpet was Stewart challenging V’landys on RSN a few days ago when The Man Who Would Be King was in full flow. Stewart remarked something to the effect that too many eggs in the one basket might make a dog’s breakfast of an omelette for everyone.

In other words, just like racing 24/7 takes its toll on many in very different ways, could all these sudden new “initiatives” by RNSW- and, honestly, are they really initiatives?- be too much? Not too much of a good thing, but just too much?

More and more races where it’s all about raising prize money for even non-Group races is a good thing for racing in Australia? Having these new “initiatives” play havoc with a country’s tried and tested horse racing timetable is another good thing? Will this bring more people to the races? Has anyone looked at the economies of scale involved? The manpower and horsepower needed? Creating even more elitism than what already exists in the sport?

Keep going with this almighty obsession to raise prize money and how many owners and “investors” can afford to play? And those who can’t afford to play in the same sandbox, where are they going? Is there the danger of opening up a fresh new can of worms?

It’s obvious that Peter V’landys only believes Peter V’landys is correct. Nothing wrong with that. It’s called confidence though some might say it’s something else.

Of course, he brushed aside anything that might have led to the questions above by reminding all and sundry over and over and over again that this is not 1997, how the world has changed, how the wagering landscape has changed, repeated the word “incumbency” as if it was going out of style, and then probably had to have a little lie down and watch Dennis Hopper inhaling amyl nitrate in the movie “Blue Velvet”.

What Pete might have conveniently forgotten is that a decade ago RNSW was crying into its prawn chowder that Victoria was encroaching on its Autumn Carnival.

More recently- February, 2016- following John Messara saying that a more “nationalistic” approach was needed when it came to the programming of race meetings, especially the big races that have built up a brand equity, Pete’s head cheerleader Ray Thomas wrote the following:

“RACING NSW chairman John Messara has written to his Victorian counterpart, David Moodie, imploring both states take a more nationalistic approach after a “ludicrous” day of race scheduling on Saturday.

“Messara was at Royal Randwick and saw first-hand the frustration and angst of punters upset that some Caulfield races could not be televised live due to the clash of race times.

“The logjam was caused by Racing Victoria’s decision to run its races half an hour apart rather than the usual 35-40 minute gaps, and this inevitably had an impact on the coverage of race meetings on the already-crowded Saturday schedule.

“’We don’t want to see another day like it,’’ Messara told The Daily Telegraph yesterday. “These race times clashes have to stop.'”

“Victoria’s racing administrators have every right to try new innovations but it was a very insular move changing race times on a Saturday, the sport’s showcase race day, as it was simply not fair on other jurisdictions and most importantly, punters.

“Racing is a marginalised sport these days and with so much competition for the gambling and leisure dollar, it needs to adopt a broader, national view on issues such as race times rather than be divided by state boundaries.

As for racing in Victoria, and it hurts to say it, but with only smoke and mirrors giving the impression that there really are people in charge of running racing over there, it really is a shambles. Peter V’landys is no fool. He’s probably read The Art Of War on Kindle, especially the chapter about “Know your enemy.”

Despite all the talk about the need for competition and looking after one’s own backyard and maximising turnover, all these recent “initiatives” have taken place because there’s no competition. A monopoly situation is being created where there once was a duopoly.

Those running racing in Victoria are, in lieu of a better word, weak, and have not been able to stop the Trojan horses. One winces, or even Winxes, at the thought of what awaits the Spring Carnival and the present and future danger facing the promotion of the Caulfield Cup. Like any power hungry creature that smells blood, you know who will pounce. But can you blame him?

This is an enemy with selective memory recall and who has fine-tuned the art of making things up as he continues his long march through the trenches. It’s racing’s Game Of Thrones.

That’s fine, and RSN’s Michael Felgate can stand on the sidelines and repeat, “Game on”. But it’s a childish game of a tale of two cities, where at the end, both sides will lose. There won’t be ABBA singing, The Winner Takes It All. Far from it. 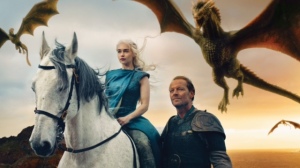 The world hasn’t just changed, Pete, it’s got smaller. So has the horse racing industry. Horse racing is also an industry under siege from different enemies whereas how racing is going to be watched in the very near future and the copyright of content- if online copyright laws can ever be enforced- plus sponsorship and how to attract even present racing fans to the races, will come into play and take precedence over everything else. Even the constantly evolving three year plan for The Everest.

Why the interest in The Everest? Extremely good friends who happen to be business partners have shares in two of the slots. We’re supremely confident this investment will not result in any shortfalls. It won’t, will it, Pete?