CALLAN MURRAY AND HIS HAPPY SOCKS HAVE ARRIVED IN HONG KONG

Likability takes one a long way in any industry. And if there’s genuine talent to go with this, there are no limits as to how far one can travel. In his twenty years, Callan Rosser Murray has already travelled far, but his is a journey that has only started. If what he has achieved so far and so soon are baby steps, watch out when he starts taking those giant strides.

On first meeting, what one can’t help but notice about this young South African rider is how much younger he looks than twenty- that and a very firm handshake and an open smile. There’s no shyness, only a willingness to engage. It’s both refreshing and engaging.

We first met at the Grand Cafe of the Grand Hyatt hotel for lunch earlier this week, and I was wondering what he might order. It was the Chinese Sautéed Spicy Chicken with Black Bean Sauce. I mentioned that it might be too spicy for him, but that didn’t bother him. “I like it spicy”, he replied, asked for a glass of water, and then wanted to know about me- where I was born, how I got into horse racing, and how Racingb*tch started.

After listening to the long and winding road that has led to where I am today, he pulled up the peak of his cap as if to say, “Whew”. Maybe he was just glad I had stopped talking. Maybe my rambling had given him the time to finish his meal. All that remained on his plate were a few slices of celery.

We chatted about his first day of riding in Hong Kong where he came fourth on his first two rides on a couple of outsiders. Why he’s known as “Sir Smiley” became clear as he spoke about how fast the racing is here and in Melbourne compared to back in South Africa, and how he spoke with such respect and admiration and complete happiness to be riding here against some of the biggest names in the sport- fellow South African Douglas Whyte, who owned the Hong Kong Jockeys Premiership for thirteen consecutive years, Zac Purton, and the phenomenon that is Joao Moreira.

Grateful, very focussed, determined, enthusiastic, youthful exuberance, happy, enjoying what he’s doing, Callan Murray is all these things. He talked about his two rides at Happy Valley two days later, and was thinking that the Tony Millard-trained Master Viking would go close. Master Viking won, thanks to a perfect with Karis Teetan coming second on Confucius Spirit. It might not have been as much of a fairy tale as The Mauritian Magician winning with his first ride in Hong Kong on the first race of the 2014-15 season, but fairy tales are in short supply these days. The key is that Callan Murray has arrived in Hong Kong, and already has a great calling card in his hip pocket when it comes to building up a support system of trainers and owners. 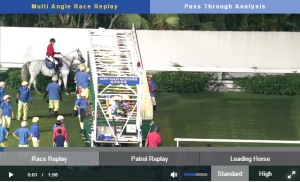 Before the races on Wednesday, he had been interviewed by Kat Coetzee, daughter of the legendary South African rider Felix Coetzee, who he had first met with me at the Grand Cafe.

“Sir Smiley” was in good form and spoke openly about what has been a career-changing 2017. Only out of his apprenticeship in January, the good times started to roll during his six weeks in Melbourne riding for trainer David Hayes and where he booted home four winners. Of course, there were the usual knockers tweeting through their pockets, and the usual vile rants. But the good outweighed the bad and the fugly. Karma will always take care of life’s losers.

Huge thanks to @lindsayparkrace for the opportunities they are giving me 🏆And to @PumpaMatt and @MellyW2907 for helping me get out here 🇦🇺 https://t.co/JQaaRbz6Lx

Listening to Callan Murray speak, what’s evident is that he wants to learn from every experience. Yes, he’s in a hurry to learn, but not at the expense of gaining experience. Everything is a life lesson, perhaps even the socks he chooses to wear, and which he was happy to show off after his interview with Kat. One day, those will be a famous pair of socks, and “Sir Smiley” just might come to be known as “Happy Socks” Callan in Hong Kong. 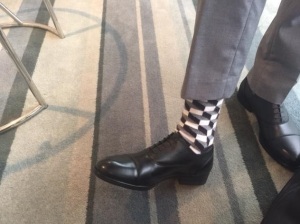 We had a lengthy chat about where he said he had enjoyed “supposedly the best steak in Hong Kong” with Ming, his work rider friend here. He couldn’t remember the name of the restaurant, but tried to explain where it was located- above an area where everything was happening with a 7-11 at the top of the street. Wyndham Street?SoHo?

While I kept telling him he couldn’t have had the best steak in Hong Kong if it wasn’t at the Argentinian steak house called Pampas, he listened while trying to remember where he had been. He had to find out and went into Google Search mode. It was another Argentinian steak house- the one called Tango. Whew. Thank goodness we got that out of the way.

We returned to the subject of horse racing and he talked about the four Group 1 winners he had ridden in South Africa in the space of just a month- one in April, three on one day in May, and the surprise of receiving the call up to ride in Hong Kong, first reported as riding for one meeting, though we all knew, it would be for the rest of this season.

What the stats say about @callan_murray after he rode three Group 1 winners in a day https://t.co/6pNiPQORbB pic.twitter.com/aXIoKwxrSD

Brilliant effort from this great young talent. If racing were football, he would be worth $100m to a major European organisation… https://t.co/8FcoFxednu

3 winners for Callan on Champion's Day 2017. 3 grade ones. Judging by the trophy he is now riding in the big league. pic.twitter.com/KsoqO9SAVC

Though the last of the French themed Happy Wednesday nights, which included wins by Frenchman Olivier Doleuze, Hong Kong-born Derek Leung and Australian Zac Purton, Callan Murray’s win started a chain reaction of wins by riders either from South Africa or else who had graduated from the country’s world famous Jockeys Academy. There was a winner from Chad Schofield and a brilliant treble from Mauritian Karis Teetan.

Like Chad Schofield, like Sammy Clipperton, like Karis Teetan, like Joao Moreira, nice guys don’t always come last. They grow up to be likeable young gentlemen like Callan Murray and for whom one only wants the best. What we’re seeing today as far as this young South African rider is considered is only the start- the entrée before the main courses are served. And there will be plenty of these including a steak with all the trimmings at Pampas.