Rapper Dragon and that feeling of loss…

There are those days when nothing goes right. Then, it gets even worse. Sunday at Sha Tin was one of those days that had Bob Dylan singing, “It’s getting dark, too dark to see” in my head as the sky grew darker, and which signalled that it was time to head off with no direction of home.

Seeing Rapper Dragon break down during the running of the Champions Mile, and Joao Moreira quickly ease the brilliant galloper down was extremely hard to take. The fact that Moreira fulfilled his commitment to ride in the next race, but was so distraught that he had to leave the track after that, spoke volumes about the man and horseman that he is.

His very genuine emotions said much about every rider and their affinity with the horses they ride. Whether a Group 1 galloper, or one giving their all in the lower grades, riders don’t discriminate. These wonderful animals become closely intertwined with their lives. And often with our own lives by making us understand and respect this relationship. Perhaps it makes us come to grips with the complexities of our own personal relationships.

The news a few hour later from the HKJC, and a simple, but heartfelt tweet from George Moore, who purchased the horse for owner Albert Hung, and whose father John trained him, that Rapper John had fought his final fight showed the completely different side to horse racing when anyone- absolutely anyone- connected with giving the sport a human face leaves us.

RIP my friend and star Rapper Dragon. He was a fighter till the end. Going to miss him #sadday #whatachampionhewas pic.twitter.com/ccSRDEukSw

When this happens, one is left feeling numb. There’s the sudden realisation that it’s not about turnover and who won what on whom. Certain things are priceless. Certain things leave one speechless. What could one say to Joao Moreira? A few weeks ago, he allowed his emotions to spill over when he and Rapper Dragon combined to win the Hong Kong Derby. And now, there was this completely different type of emotion. 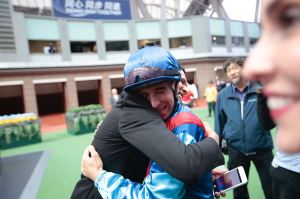 The day earlier, there were some very unnecessary remarks made on social media about Joao Moreira returning to Hong Kong “empty handed” after a flying visit to ride in Adelaide. Someone who really should know better commented that it would have been better if apprentice Matthew Poon came instead of Joao as “he knows Morphetville better.” Was this really necessary? And to the HKJC, was this trip to Adelaide by probably the best rider in the world today or, at least on a par with Ryan Moore, really necessary?

Well the Magic Man Joao Moreira leaves @SAJockeyClub without a winner, but hey that's racing. Fabulous to meet you Joao hope we get you back pic.twitter.com/lefVbIBfHt

Social media can often be a brilliant marketing tool and help bring people together, but it can also show the pettiness and ignorance of people who don’t get out much because of being trapped inside the Tall Poppy Syndrome.

From a horse racing perspective, there were those who were lamenting that Rapper Dragon breaking down had cost them winning. There was then the “racing aficionado” at Sha Tin racecourse who hurled abuse at Joao Moreira for easing his horse down, which he did when he heard Rapper Dragon snap his pelvis. This armchair critic believed that the rider had pulled the horse up.

All this type of behaviour does is show the truly ugly side of racing. It’s little wonder that many out there don’t wish to have a thing to do with it and think this pastime is overrun by crooks and losers.

Often it is- losers- especially on social media where one can hide behind pseudonyms and “freedom of speech.”

Upon leaving course Joao Moreira too devastated to say much about Rapper Dragon, said he heard a loud crack & eased horse down: "Very upset"

Rapper Dragon still on 4 legs..been walked into the horse ambulance #shatin and we have 2v1 protest

Joao Moreira, Douglas Whyte, Felix Coetzee, Zac Purton and so many others give the sport a sense of dignity. The day before when discussing Aerovelocity having to be withdrawn from competing in the Champions Sprint Prize, and which would have been the galloper’s swan song, the champion rider that is Zac Purton almost seemed relieved. He talked about how this horse that had given him one of the greatest highlights of his riding career by winning in Japan- a horse often overlooked and underrated, and would now be enjoying a well deserved retirement. One wishes the same could have happened to Rapper Dragon. But this happy ending wasn’t in the script.

On that numbing early ride from the track, I mentioned to the driver what had happened. His reply: “But you still win, yes?” No, I lost. I carry this sense of loss and memories of those in racing I have lost over the years with me. It will be very tough to sleep tonight for all those who knew and loved Rapper Dragon. And everyone who follows horse racing for the pure love of the sport. 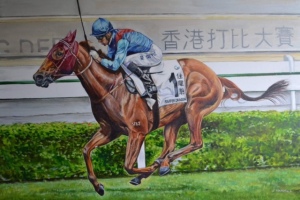 Credit: Painting by Janet Hammill from a photograph by Wallace Wan

2 Responses to Rapper Dragon and that feeling of loss…