THANK YOU, GREG MILES. WHAT A RIDE IT’S BEEN…

Greg Miles was a narrator. That was what made him such a great race-caller. He didn’t just “call” a race, he took listeners along for the ride, especially when away from television screens or unable to stream the races. Through his calling and his vast knowledge of a horse’s racing style, where it was positioned, and being able to read most race tracks, he was able to tell listeners how well or badly each horse was travelling and how much longer there was to run. With him taking one through a race, the listener knew exactly where their horse was, and whether it had a chance to win or place or whether the race had been run and it was time to sing, “Closing Time”.

In 1995, a young Matt Hill met his idol Greg Miles. On Saturday, he replaces him as the voice of Victorian racing. pic.twitter.com/Uxd6NC4u3x

Of course, there was then that voice- confident, authoritative, and succinct. It wasn’t that highly excitable style of race-calling from a different era where everyone sounded like a Edward G Robinson or James Cagney-type character from a Damon Runyon plot. Greg Miles brought things down a notch, and in so doing, gave race-calling a new voice. It still added to all the excitement, but also gave the sport something it was lacking: Sophistication.

Greg Miles didn’t veer into clichés and the superfluous. There was no waffling and rambling and thinking ahead about giving a big race a big, memorable ending. Those big, boom, bang endings seldom come off. Or else they come off sounding forced and contrived. Greg Miles stuck to the script- the script he knew the racing fan wanted to hear: How each race started, what happened in the middle and how it ended. It was like Jack Webb in the American television series “Dragnet” interrogating someone and cutting straight to the chase with a curt, but polite, “Just the facts, m’am, only the facts.” And when there came that excitement of the finish, it was always honest. It came from heart, head and wherever else emotions come from. 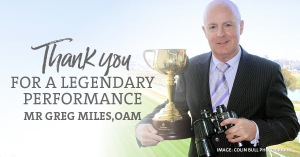 Even when a panelist discussing the upcoming races for the day with such experienced racing analysts like Deane Lester and Warren Huntley, he stuck to the facts, often with a sense of subtle humour. He was a great team player. He didn’t crave or hog the limelight. He had nothing to prove. He had a job to do. And he did it magnificently.

A few months ago, a group of us in Hong Kong were in a restaurant listening to the running of The Newmarket. Halfway through the race, I ordered a bottle of Champagne and announced to my friends, “Redkirk Warrior won it.” They asked how I knew. “Greg Miles just told me.”

Yes, Greg Miles had taken this listener along for the ride explaining exactly where each runner was positioned in the race. He intuitively knew what jockey Regan Bayliss was doing on Redkirk Warrior, where he was positioned, and how much “horse” he had left under him. And he called it right. After the race, that bottle of Moët went down very well.

Narrator, storyteller, race caller extraordinaire, Greg Miles was all that and more to horse racing in Australia. Next? That’s up to this brilliant professional. After 37 years in the game, he’s bowing out a winner in every way by accepting all the accolades with great humility.

With all that experience, perhaps he can be persuaded to return as part of a racing club in a position created specifically for his many strengths?

There will be the very much deserved awards and tributes from all those fortunate enough to know and have worked with him. Here’s someone who will remember the times when visiting his parents in Melbourne, where they lived for almost forty years. They were not the least bit interested in horse racing except for the Melbourne Cup, but always had his father ask for quiet whenever it was Greg Miles Time on his radio.

“I love this man’s voice,” he would say. “Who’s this Greg Miles, son?” He didn’t care who won or lost the race. He was listening to a voice that he said “was calming. Like Nat King Cole”. After every race, he would ask, “Son, have you met the gentleman?”

Here’s hoping that one day “son” does meet Greg Miles to personally thank him for everything he has given to horse racing- and the calming influence he had on this writer’s father.

Greg Miles, you’re a class act. Always has been, always will be.

3 Responses to THANK YOU, GREG MILES. WHAT A RIDE IT’S BEEN…