“When I knew we had the race won, the roar from the crowd- the energy from those thousands- was a feeling I can’t put into words.”  – Felix Coetzee

I could write this article as if I was a general reporter. As if I had no connection to the subject I am writing about. However, the fact of the matter is I do.  So I think this may come over better if I’m just blatantly honest.

This is about my dad ex-jockey Felix Coetzee and one of the many great horses in his life, and no doubt the greatest, Silent Witness.

Last night at dinner, the question was posed to my mother as to what life was like during the time of Silent’s peak in Hong Kong. She described the exciting race days, the glamorous dinners where it was only acceptable to wear green and black. The crowds screaming, “Ching Ying Dai See” waving their flags. It sounds like something out of a movie sometimes. Being a teenager at this time, I just remember our house suddenly getting a black and green theme in some rooms and purple and yellow in others, as my father also started riding Lucky Owners at the same time.

Silent Witness came to Hong Kong with a big reputation. Therefore my dad had a huge amount of respect for Silent straight away. I can remember asking my dad what Silent’s character was like and he’d say, “He just really knows that he is great. He is like any supreme athlete, he has an air about him, he’s a little bit aloof and he’s very confident about himself.” 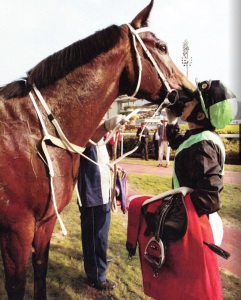 I’m not going to send this article to my dad before I post it because he is a very modest man and will probably ask me to take any form of praise out. However, I find that quote so funny because my father was, in his own right, a supreme athlete. So to hear him talking about this sort of persona as if it didn’t apply to him was so strange. However, there were some differences. With Silent looking at him, you knew he knew he was fantastic! My dad comes across as humble. Always. Very rarely will you hear him blowing his own horn. I don’t know if its specifically confidence that my dad exudes, but when I have seen him in the parade ring talking to trainers and such, you can see a mile away he knows exactly what he is doing. Even in a race you can see my dad is in control and in his element. I suppose that is too a form of confidence, but a different type to that of Silent Witness. 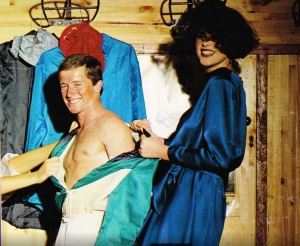 I was lucky enough to go to a talk held by Monty Roberts aka The Horse Whisperer, who kept bringing up the point that the relationship between rider and horse needs to be a partnership. Looking at my dad’s personality, Silent’s personality and the amazing journey they went on together…well…its another Batman and Robin pretty much!

One thing is for sure; they were both supreme athletes at the peak of their game with a goal in mind. My dad will always say how Silent just wanted to be in front. How he wanted to win. He didn’t like other horses being in front of him. He was just naturally the leader of the pack. 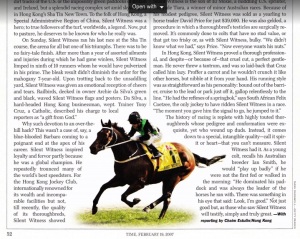 For research purposes my father went to Australia last week, and while he had the opportunity, he went to visit Silent Witness at the Living Legends farm. This is a beautiful farm with lovely big paddocks for the horses. According to my father, the horses all have a friend staying with them and they all look happy and healthy. I asked my dad how Silent was. Is he the same, personality wise? He told me, “He was his normal aloof self, he still knows that he is great. When I arrived, he was busy eating so he wouldn’t give me any attention. Eventually, after he had enough food, he walked off and I had to follow him and wait a long time before he decided to give me some attention. Finally, he relaxed next to me and chewed my cap and did all the little things that he has always done with me. This behaviour was not surprising though. He has always been like that.”

How wonderful to hear that a horse who has been in retirement for a long time had still not lost his sense of pride. If you didn’t know, Silent Witness had to go into retirement after picking up a virus on his travels that he just couldn’t get over properly.  This caused him to sadly lose his form. He was never really the same after that.

Funny enough, I asked my dad what his favourite winning memory was with Silent. He said, “That would probably be Japan. After all the challenges we faced on that trip – I fell off him and he ran around the track the day before the big race. We were all concerned after that but (trainer) Tony (Cruz) had all the faith in the world that Silent would be fine….and he was. He won! That whole trip was amazing for me. It was also special to have Daniel (my brother who is now 16) at the racetrack with me.

(Our scrapbook memories of Japan)

Being too young, I was never able to attend the races, but where we used to live in Sha Tin, I was able to stand really close to the racetrack and see the horses go past the winning post. I’ll never forget the ground almost shaking and the loud thundering sound of the horses racing past us. I remember Silent in all of his dark beautiful glory thundering past us. His size and strength was always intimidating. No wonder he was such a winner.

Two champions who have never let go of their pride and are still widely respected today. I must say I feel so privileged to have grown up so closely related to both of them.