THE BACK WITH A VENGEANCE ISSUE

CAN RACING SURVIVE THE CHALLENGE OF THE NEW WORLD ORDER?

It’s just little over a month since we farewelled 2016, and yet it seems so long ago. Perhaps when historians analyse 2016, they will come to the conclusion that 2016 was a year when the world changed dramatically. Think of the two most significant events – Brexit, and yes, that man Donald Trump. Never in one’s wildest dreams and darkest moments could the Brexit-Trump quinella been predicted. Not unless Nostradamus made his second coming.

What Brexit and Trump have demonstrated, beyond any reasonable doubt, is that the citizens of both countries have lost faith in the institutions that make up the decision-making part of Government. This loss of faith is becoming contagious, and spreading across societies. What has this got to do with horse racing? Plenty. You need to go no further than Australian racing – in free fall in every State, and taking its own bullet train to follow in the footsteps of European and American racing, the best of which rests somewhere in a racing museum, if one could be found.

If the Australian racing community’s natives are getting restless, then it would be a fair assumption that they would do to the Governing Bodies and their administrators what the Brits did to the EU and the Americans did to both the Democrats and the Republicans. The Governing Bodies and Administrators of racing are on the nose, and what fertile ground for the blatant undermining of the Melbourne Spring Racing Carnival by the sworn enemy from across the border.

Putting on a $10 million Sprint race with one of the most unfortunately puerile names ever to have been thought of on Caulfield Guineas day, one of the best Group One racing days on the Australian Racing Calendar, would have to rate as the most provocative and inflammatory acts by a racing administration for decades.

In one fell swoop, the newly forged alliance of previously hostile racing entities – the ATC and Racing NSW- have struck a dagger into one of Australian racing’s only significant event which is taken seriously by not just ordinary everyday Australians, but beyond the shores of Terra Australis.

The Victorians can kiss goodbye to their Group One Sprint races in the spring. Ask any Trainer worth his or her salt, and they will tell you that it is just about impossible to peak a horse twice in the one preparation. And it’s not just the Victorian sprint races during the spring racing carnival that will be affected, but it’s not just the Melbourne Spring Carnival sprints that are potentially in the gun. The poorly named $10 million race scheduled for October 14, will also impact on the Hong Kong International Sprint, potentially by targeting Sprinters from different parts of the globe who may be heading to Shatin in December.

Then again. it is no secret that Hong Kong racing and its racing administrators have not been on the Christmas card list from Racing NSW since the infamous and unfortunate Chris Munce affair.

Interestingly, the mixed reaction from the racing community to the “Everest”, has centred around the growing number of detractors seeing through the race for what it is – further evidence of NSW racing’s descent into elitist racing.

When RacingB*tch was in it’s infancy, we warned of the dangers and ramifications of Racing in NSW becoming disengaged from both the racing community and the community at large. The “Everest” has entrenched these fears.

What is worrying for all sports, and not just racing, is the growing trend towards authoritarianism in the administration of sport at it’s most senior level, mirroring the equally worrying trend at the highest level in political parties and in Government.

Chief Executives in sport are increasingly being driven by their own self-fulling agendas and naked self interest. The best interests of the sport and its participants and fans appear to be subservient to the agendas of self interest, hubris and out of control egos and vindictiveness.

It will get worse as the race for the hearts and minds of fans and the ever shrinking pot of commercial funding diminishes with sponsorships and marketing dollars under siege from the new age of social media and technology offering a raft of alternatives at a fraction of the cost of bloated commercial deals which have hardly ever stacked up in delivering the outcomes they were supposed to deliver.

Racing, in particular, has to be doubly careful that it doesn’t allow the masters of spin to dream up gimmicky ideas for races and racing events, and carefully and deliberately channel and divert attention away from the “REAL” challenges that it is facing.

Unfortunately in some states there is no accountability, and where the tail wagging the dog has been taken to a new level.

Racing should have a lot to look forward to if it can only address its own demons. Instead, racing has much to fear from the new world order which threatens to engulf it and reduce it to a state of irrelevance like many other elitist sports which are trapped in a time warp, with little going for them in the 21st century.

WHAT’S IN A NAME?

If ever there was a less appropriate name for what has been billed as the world’s richest and by implication signature race, the Everest wins hands and legs down.

Conquering Mount Everest has been one of the most enduring challenges for mankind. The best known conqueror of mission impossible was the Kiwi explorer Sir Edmund Hillary, way back in the 50’s. But that was so long ago, even the “baby boomer” generation has difficulty remembering what it was all about or who Sir Edmund Hillary was. Ask Gen Y and X and the blank looks on their faces will tell the story. 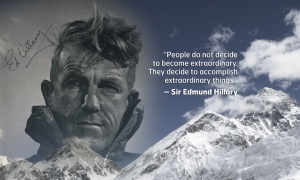 Back to the NSW incarnation of Everest, we wonder aloud whose thought bubble resulted in such an inappropriate name? Everest, for one, is about massive and unreserved volumes of stamina and endurance. In racing lingo, it requires a reservoir of staying power. It’s about distance. If it were a sprint, Everest would be insignificant .So why name a sprint race after a conquest which requires everything associated with stamina? 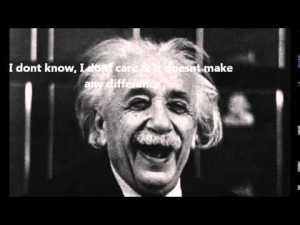 But there’s a darker side to Everest – a side associated with tragedy. Everest has claimed the lives of many. It is one of the harshest environments challenging the most toughest of explorers. The challenge of conquering Everest is littered with failure. 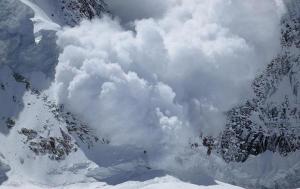 It begs the question of why Everest was chosen as the name of the race. Surely there are a swag of recognisable names which would have given the race a distinctly Sydney or Australian flavour, and at least given the event an illusion of innovation?

The longer the vacancy sign lights up the dual offices of Chairman and Chief Executive of Racing Victoria, the more both roles present as the poisoned chalices of Victorian racing. In it’s relatively short history, Racing Victoria has seen five Chief Executives come and go, with no lasting or positive legacy. The Board has seen the arrival and departure of four chairmen, the last two resigning without completing their terms. Hardly a pass mark for Victorian racing’s peak governing body.

How Victorian racing has managed to retain it’s position as the leading racing state is one of the greatest conundrums in the world of sport. Perhaps it speaks volumes about the state of racing in other states. Strong and decisive leadership is an oxymoron in racing. Take Hong Kong’s Winfried Engelbrecht-Bresges out of the equation and racing worldwide is bereft of quality leadership. Has anyone even bothered to join the dots and work out that this leadership may have something to do with Hong Kong racing powering ahead and being the blueprint for the rest of the racing world?

The hapless Victorians are like a ship without a rudder. Their head hunting for a Chief Executive is akin to a stallion firing blanks in the breeding barn. Perhaps the “heads” out there just don’t want to be hunted? Despite an enticing remuneration package, prospective candidates could be rightfully fearful of the collateral damage to their careers and reputations in an environment which wreaks of instability and a raft of unresolved serious integrity issues. 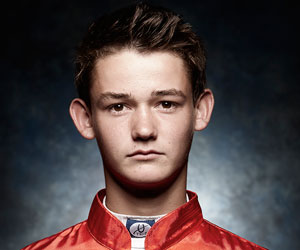 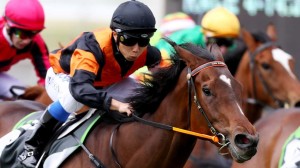 They come from vastly different backgrounds – Matthew Poon and Regan Bayliss, but these two enormously talented young guns in the Australian jockey ranks have one important thing in common – Talent.

Matthew Poon, is the favourite to win the South Australian jockeys title this season – an honour which he richly deserves. A little over 18 months ago he was just another little known apprentice on his P plates in the very quiet and subdued environment that is South Australian racing. A Hong Konger, Matthew Poon, was no different to many other young kids doing their apprenticeship, with few exceptions in some of the far flung country and rural areas in various Australian states, before going back to ply their new found skills in one of the most competitive and high quality jockey rosters in the world.

While many have struggled, The Poon Train’s success story will give him a fighting chance when he comes up against the likes of Moreira, Purton, Whyte and the many other top class jockeys that make up the Hong Kong jockey roster. 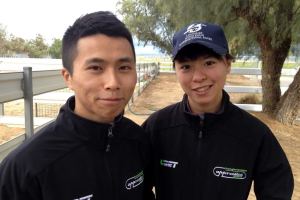 Like respected SCMP racing writer Alan Aitken, we hope that Matthew Poon hangs around his South Australian base, and is given the chance to ride in both Melbourne and Sydney against some of the many world class jockeys in both States. Broadening his experience riding in the two States can only make Matthew Poon a better jockey and prepare him to take on some of the world’s best in Hong Kong. 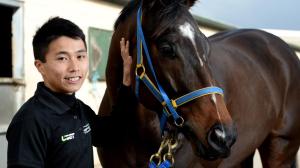 There can be no better endorsement of Regan Bayliss’ prodigious talent than to be entrusted with some of the “plum” rides from the David and Ben Hayes and Tom Dabernig yard.

It would be futile to sing David Hayes’ praises. Hayesey is one of the best and has been for some time, not just in Australia but in Hong Kong as well. Not only does he demand a high work ethic, but he does not tolerate mediocrity. 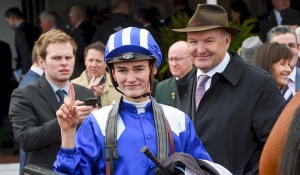 Regan Bayliss is riding so well and against the best in Victoria, that his elevation to the senior ranks has been fast tracked. He is fiercely competitive and has what some regard as a “bit of attitude”, which harnessed in the right way can only make a sportsperson better.

There’s little doubt that since joining the Hayes team, Regan Bayliss has progressed to become a better jockey whose services are in high demand. We reckon he can only get better. 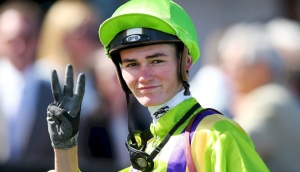 1 Response to THE BACK WITH A VENGEANCE ISSUE