Having been born in what was then Ceylon- a rabid cricketing nation now known as Sri Lanka- played school cricket while looking up to two elder cousins playing cricket for various clubs in Hong Kong, one captaining Hong Kong, and growing up around the sport, cricket has not only played a role in my life, the sport was once part of a city trying to find its way through trial and error by being an important meeting and melting pot of nationalities.

My eldest cousin- Carl Myatt, pictured below at the centre of the photograph, was Editor of The Sunday Morning Post and later, the TV Times, but was far better known for his bowling and captaincy of local cricket clubs like the Indian Recreation Club, the Craigengower Cricket Club, and later captaining the Hong Kong cricket team.

Whereas his younger brother Tony, below, with and without hair, was always said to have more talent- a lethal pace bowler who could make a ball turn faster than Linda Blair’s head did in “The Exorcist”- he didn’t have the determination and discipline of Carl. 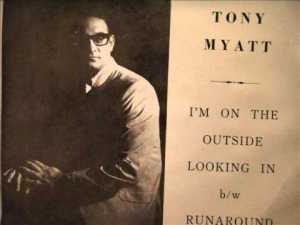 When the twin opening attack for the IRC- the Indian Recreation Club- before politics forced them to move to the Craigengower Cricket Club, the Myatt brothers certainly had their female fans, both on and off the field- very well known Chinese singers and actresses along with a number of young expatriate ladies who found a certain stud value in these two handsome young cricketers.

With Tony’s first love being music- he was the first lead singer in Hong Kong’s first pop band The Fabulous Echoes- he eventually left Commercial Radio where he was a popular disk jockey for the UK. There he worked alongside legendary disc jockeys like the wacky Kenny Everett, below, Dave Cash, Ed Stewart, Tommy Vance and others for the then newly launched Capital Radio. Carl on the other hand, never lost his love for cricket. 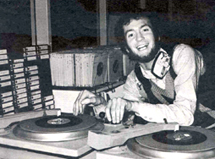 Perhaps without realising it, he and what was then a truly multi-cultural team comprising the Lalchandani brothers, Jalu Shroff, etc made the Hong Kong team he captained great ambassadors for the sport, a sport that took them to the UK, Australia, New Zealand and parts of the Caribbean. And the female groupies were always there. The groupies weren’t of Led Zeppelin quality, but from what was heard, a good time was had by all.

All this was happening in a new and young Hong Kong, where everyone was a stranger in a strange land. This created the groundwork for what eventually grew up to become the Hong Kong we know today. But getting here was decades away.

The Hilton had just given the city its first International hotel, and Hollywood royalty would regularly drop into town- Ava Gardner, William Holden, Cary Grant, Frank Sinatra, Steve McQueen and others.

These celebrities were the catalysts and inspiration for showing budding entrepreneurs like Runme and Run Run Shaw, and Li Ka-shing, today, Hong Kong’s richest man, what could be- a booming film and property industry, and all in a city where suddenly everything was possible.

Going out meant a night at the Blue Heaven or the Bayside on Kowloon side. Somwhere, an unknown actor named Bruce Lee was being named the Cha Cha King of Hong Kong. 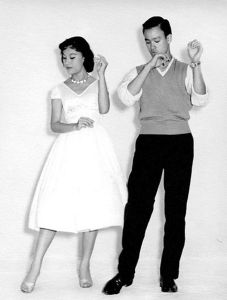 As for  horse racing, this was still in its amateur days with the one racecourse in Happy Valley and the champion rider being the somewhat pudgy looking Kenny Kwok. My, how times have changed…

Cricket, and not horse racing, was in many ways the only game in town in colonial Hong Kong. Perhaps it was the lead up to the Handover in 1997, and a city that had transformed itself into one of the business capitals of the world is what saw the popularity of cricket started to wane. There were far more important issues at stake: a future. 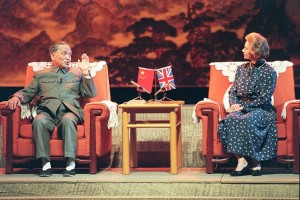 Politics aside, new business opportunities came into being along with entrepreneurs like Allan Zeman opening up the trendy Lan Kwai Fong area.

Followed were the popularity of clubs like Disco Disco, The Scene, The Den, Canton and The Purple Onion. Bruce Lee was to eventually enter as The Dragon, horse racing turned professional and found its feet, the Beatles, without Ringo, performed at the Princess Theatre in 1963, and Hong Kong’s “new world order” was taking shape. 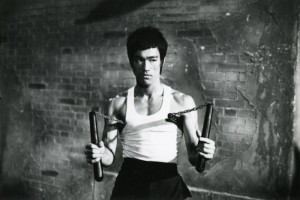 Cricket? Well, cricket continued, but it had been pushed into the background. Way back. It was part of the colonial past. It had become irrelevant, and fobbed off an old man’s game. An old white man’s game belonging to another era. 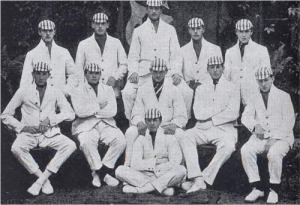 Of course, having reinvented itself, cricket has made a huge comeback around the world today. It’s no longer a game only for the “Sub Continent”. Hardly. With someone having the vision to mix and match the players into some sporting version of We Are The World and Black Eye Peas, cricket today is a world game- shorter, with innovations that have broadened its customer base manifold whereas how its marquee value sporting heroes and breakthroughs in sponsorship marketing is presented is something every sport should absorb, and be inspired enough, to at least, try and emulate.

In Australia, for instance, take Winx out of the equation, and the popularity of cricket is making horse racing look like a tired hack. One plods along, whereas the other comes across looking fresh, exciting, financially successful, having huge sponsorship appeal, a brilliant future, and, of course, offering fans a number of new betting opportunities. 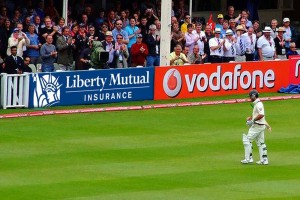 Cricket is no longer five days of boredom, especially to many females who used to have to be dragged and kicking to watch a Test series. I was married to one. Nothing against greats like Geoffrey Boycott, Ken Barrington, Colin Cowdrey, Peter May, Mike Gatting etc, but there’s a new breed of cricketers today whose very appearance on a pitch, let alone everything they bring to the game, even make the goldilocks of Sri Lanka’s Malinga and the tatts of Kevin Pietersen- my favourite cricketer- look old school. It’s like comparing Vanilla Ice with Weeknd. Okay, that might be a stretch.

Cricket is no longer “the gentlemen’s game”. There’s more than a hint of Rock’Roll to it. It’s much more than what 10cc sang about on “Dreadlock Holiday”, and, going back in time, the calypso paean to the twin spin of Sonny Ramadhin and Alf Valentine.

Players like David Warner, probably the most exciting player in the world to watch today, and the breakthrough uses of technology, has made the sport more accessible, and more popular with all age groups. 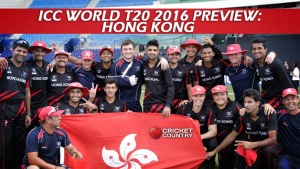 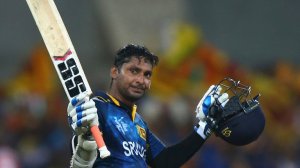 What keeps going through my mind is this: After the March event, what next? The few people I have met with the task of taking cricket in Hong Kong to where it’s never gone before are passionate about the sport and, quite rightfully, proud of what they’ve achieved in what’s been quite a short period of time. 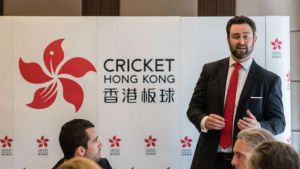 Having said this, what’s next for the sport and all its by-products? What’s there that can make it a truly international Made In Hong Kong product?

If the above can be achieved, it can be groundbreaking stuff, especially with Hong Kong being home ground and the backdrop, everything can and should be built around this city. But how does one get here? How’s is Cricket HK going to arrive at this USP which cannot be cloned by a neighbour like Singapore, another small cricket playing city?

Right now, Hong Kong seems to have one writer promoting cricket in the SCMP. Yes? Wrong? Nothing else to promote the sport other than “infotainment” to the already captive audience on that often overrated delivery platform called “social media” with all its clutter?

How is cricket in Hong Kong and all its very interesting back stories, especially how the sport is attracting young local players like Li Kai-ming, below, being marketed, for example, to audiences in Mainland China, who have no access to Twitter, Facebook and YouTube?

How is cricket in Hong Kong being marketed to all the other cricketing nations- and even non cricketing nations who might be interested in knowing how and why the sport has touched even a tiny nerve in this city? What’s the marketing hook? Where’s the beef? How many cricket fans- and sponsors- and those who might be interested in funding the sport- realise that Mainland China has its own women’s cricket team? As we should all know by now, anything that involves Mainland China is a powerful magnet- especially sports.

Over a year ago, the Hong Kong Jockey Club expressed more than a passing interest in understanding how the sport works, Cricket HK’s plans for cricket, and how, possibly, the organisation could play a role in advancing the game through its Charities Trust. Why the interest? With a clear marketing strategy in place, cricket in Hong Kong can help assimilate various minority groups into the local community. If cricket can do this, it’s in line with the role of the HKJC in Hong Kong. And if there could be some form of partnership between CricketHK and the HKJC, it’s a powerful marketing tool. And USP.

Has this initial interest in cricket by the HKJC gone anywhere? Does Cricket HK have a holistic five-year marketing programme in place? If so, is the HKJC aware of this? Forget about making the Club understand cricket or what The T20 is. It needs to understand how all the pieces fit. How cricket can bring different nationalities and cultures together to benefit Hong Kong- the city and the people. Forget elitism and preaching to the converted. That’s often where the marketing of horse racing goes horribly wrong.

As in the early Sixties in Hong Kong, a multi cultural cricketing community can only help to re-establish the cosmopolitan image and character of this remarkable city that’s gone MIA due to politics, pettiness and Hong Kong’s Angry Birds flapping their wings and making much ado about nothing.

Wouldn’t it be wonderful if the game of cricket can turn all this negativity into something positive? And it can. 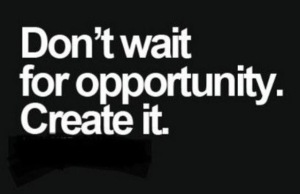 Cricket HK simply needs to step out of the safety of the nets, hit a mighty big Six, arrive where there are no boundaries, and see The Big Picture.