WHERE TO GO, WHAT TO DO IN HONG KONG: THE 2016 LONGINES HKIR TRAVEL GUIDE

For those making that annual pilgrimage for Longines Hong Kong International Races week in December, a few pointers, observations and writing through first hand experience, much schlepping around, and knowledge: Hong Kong today is no longer what it was. It’s no longer about meeting up at the Champagne Bar of the Grand Hyatt before heading off to the China Club or the Hong Kong Club or the Red Pepper for dinner followed by a night out in Lan Kwai Fong. Nothing lasts forever.

The Champagne Bar is rather cold and empty whereas Lan Kwai Fong has run its course and is over-run by cheap bars, sheesha joints managed by new arrivals from the sub-continent and where the clientele is not who one would take home to break naan with mama. Even a brief stopover at Al’s Diner for old times sake, and where Shane RS Dye once held court during HKIR week while sipping a Coke, can be depressing as hell.

Apart from the almost “communal” Mexican eatery Brickhouse, tucked away in a back alley, but known to those in the know, the favourite casual restaurant in the area and a favourite with the Purtons, the rest are stragglers from Saginaw and gawd knows where else. And whatever you do at any of these other joints with circus barkers begging you to come in, don’t eat the food and demand to see the brands of alcohol used to mix cocktails. Abs Vodka is not the new Absolute. Better yet, just stick to Brickhouse. 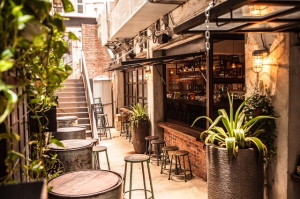 One rule of thumb we use is to frequent the restaurants and bars owned, managed and marketed by Maximal Concepts. Every one of their products are Group 1 establishments. Visit http://www.maximalconcepts.com and check out everything else that bears their name- the excellent nouveau Chinoise accentuated Mott32, below, Stockton’s, Limewood, Fish&Meat and more. 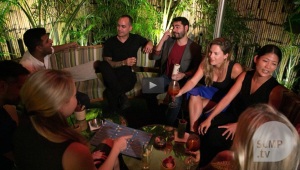 Meanwhile, there’s Wyndham Street, which has managed to die a quick death. Restaurants, bars and clubs that were there a year ago, closed and left forever singing, “Hello darkness, my old friend”.

If able to get past those gentlemen from, usually Gambia and Nigeria wandering the Wyndham strip offering passersby a veritable buffet of illegal substances, and managing to get into the club and local institution that is dragon-i, one is often left wondering, “What the hell am I doing here with the Beautiful People and slinky young Russian models circling my table for a bottle of Crystal Champagne while offering me and my friends false hope and great expectations that quickly disappear at 3am?” All you’re left with is the headache of staring at a massive bill for nothing.

The entire entertainment landscape of Hong Kong has changed. And drastically. The upmarket escort clubs in Tsimshatsui East like Club BBoss and China City, where some of us partied with Goldie Hawn and Kurt Russell and visiting Rock bands, closed their doors a decade ago. And with them left those stunning and always accommodating ladies from the Ukraine and, especially, Lithuania with whom some of us co-habited for many years. They went back- back to the USSR.

The only escort club left in that area today is the extremely pricey Club De Hong Kong, where the mamasans will drink themselves silly- on your tab- and tell you just how bad business is while girls call you “honey” and tell you that you’re “handsome”. The whole vibe doesn’t exactly fill one with confidence and that joie de vivre. It’s more like being stuck in a rundown pool hall with some manic depressives during a rainy night in Georgia.

Tsimshatsui East is trying to rebuild and reinvent itself, but those running the area and the restaurants and bars are prime examples that class and style cannot be taught or learnt. It’s the blind leading the blind. And those who have seen better days and smelling an opportunity are in there trying to sell the C Grade establishments springing up here their expertise as advisors. C Grade startups trying to be what they’re not are either a recipe for disaster, or else hastily opened money laundering joints.

Across the harbour and in Wanchai, only Dusk Till Dawn still soldiers on down Funky Town. Spicy Fingers is no more, Fenwick became Escape a few years ago and is today overrun by sour looking Colombians and suspicious Filipinas, HK Cafe is going through the motions of trying to stay afloat, and a night out in what was once an adventurous walk on the wild side can be a tedious affair with no Happy Endings in sight. Not even at that human mosh pit known as Amazonia. Players down Lockhart Road offers some hope of adventure, but haven’t most of us left those days of hanging out until 4am just to be obliterated behind us along with the Wolf Of Wall Street? So where to now, Tonto?

Going up the country with Canned Heat and some Uptown Funk, The Lobster Bar at the Island Shangrila is supposedly one of the top bars in the world- and which is completely lost on us. One must say that the bartenders are creative and can make some great cocktails, but is this enough?

The place might be packed, but people make anywhere rattle and hum and most of the regulars we have encountered here are a motley crew of local expats, local locals, all on the mature side of old, and the odd lone woman making an arse of herself by dancing alone and in front of your typical Filipino trio with the obligatory Western chanteuse absolutely murdering the latest hits. It’s cringeworthy stuff. Worst of all is when the over-the-hill chanteuse tells you that she’s from Hollywood and is busy recording three albums. At the same time? Then what are you doing in Hong Kong, darling?

Though there’s always the China Club and the posh and over-the-top restaurant/bars like Sevva and C’est La Vie, the whiff of pretentiousness and seeing people flaunting their wealth, and protecting their standing (?) in Hong Kong while those legends in their own lunchtime blow air kisses to each other before engaging in the art of vapid nattering, is not for us. But if this is what turns others on, so be it.

With the spiralling rents, more and more smaller eateries are opening up. One of these is Blacksalt (www.blacksalt.com.hk), an unpretentious restaurant where the emphasis is on a mixture of creating the right atmosphere for the cuisine of chef and owner Taran Chadha, below, where the Asian-based dishes are refreshingly unique because of the creative use of various spices.

To be continued as the lead up to Longines HKIR Week continues….

1 Response to WHERE TO GO, WHAT TO DO IN HONG KONG: THE 2016 LONGINES HKIR TRAVEL GUIDE