CO-MINGLING: WHAT’S IN A WORD?

Gawd knows, it’s been written about enough- sometimes as “commingling”, other times as “co-mingling”- but, other than the really hardcore punter, or Ye Olde School mainstream racing writer, what does this actually mean? Has this strange word, galloped off into more Racing Speak without all the homework and groundwork been done so that it doesn’t become another very niche, or else, confusing product that will never reach its true potential? Or will it have to make a strategic U-turn, start again, and educate that big old racing world out there what co-mingling/commingling is all about? The racing media can devote huge numbers of column inches on the subject, but inches rarely penetrate some fundamental problems about how this is all meant to work.

Let’s cut to the chase. Co-mingling is a confusing and difficult to understand concept to the average punter. It has its place in corporate speak and in the board rooms of racing governing bodies where such concepts are digested as easily as porridge. The average punter doesn’t give a toss about how pools are mingled, co-mingled, expanded, joined together, bet into between racing nations. Confusing, isn’t it? Get the picture?

This is where the KISS principle needs to be applied. Keeping it bloody simple, stupid and uncomplicated to the average punter. Develop a saturation awareness campaign on the many strengths of Hong Kong racing and the wagering products available to Australian punters to bet into domestically, and support it with two non-negotiables – extensive quality information and Vision. The information age has focussed more than ever on the availability and ready access at providing these non-negotiables at no cost to the customer (Punter). For vision, certainty of access through delivery free of charge on ONE channel rather than the existing and deplorable guessing game facing punters as to which of the three Sky Channels show different races on the ten or eleven race card on a weekend.

From the outside looking in, unless there’s far more information – and information is knowledge- on all the jockeys, trainers and horses involved in all these co-mingling markets, it’s looking very much like a closed shop with a little window dressing for show. It’s a bit like adding some croutons onto a lettuce salad, or calling chips pommes frites. It’s horse racing, as usual, making what is simple, sound like rocket science, and thinking racing fans are intellectual midgets.

In Australia, for example, the racing public might know the names Joao Moreira and Zac Purton along with Brett Prebble, Chad Schofield, Nash Rawiller, and, perhaps, trainers John Size, David Hall and John Moore, though all three are hardly “Made In Australia” names anymore. But what about talented local riders like Derek Leung, Keith Yeung and Vincent Ho? And international names like Christophe Soumillon, Silvestre De Sousa and the host of European jockeys who ride in Hong Kong during the European off-season?

What about boom female apprentice Kei Chiong, who rode a history-making four-timer at Shatin on Sunday- an extraordinary feat considering she’s in her first season of riding in Hong Kong and riding against some of the best riders in the world? How will this achievement- and this jockey- be marketed to attract perhaps more females in Australia to racing in Hong Kong? Girl Power didn’t end with the Spice Girls. 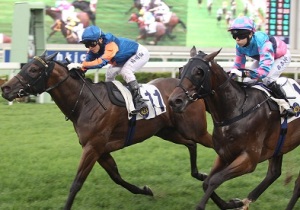 What about trainers like Caspar Fownes and Tony Cruz and Danny Shum, Dennis Yip, Ricky Yiu, Richard Gibson, Tony Millard, to name just a few? What about top Hong Kong horses like Designs On Rome, Aerovelocity, Peniaphobia, Super Jockey, Beauty Only, the emerging talents Lucky Bubbles and Amazing Kids? How many Aussie punters recognize Victory Magic, the HK Derby runner-up and potential middle distance super star who raced down under as Atmosphere?

How is all this information being marketed in Australia? If this is the task of Tabcorp, the HKJC’s co-mingling partner in the land Down Under, it won’t go anywhere except South By Southwest. The kindest thing that can be said about Tabcorp’s marketing efforts of Hong Kong racing is an E for Effort, though one questions just how much effort goes into delivering their part of the bargain- and partnership.

Think about it: How effective have their marketing efforts been on some fundamentals like the Early Quaddie, the Big Six, the Late Quaddie, and actually promoting Hong Kong race days? What’s the media plan? What’s the creative product?

If this is being done through its broadcasting partner in Sky, then, we must have missed it along with seeing Hong Kong racing on the broadcaster’s hyper-active and dog’s breakfast buffet of channels. It’s like waiting to watch race six at Shatin the weekend before, but then suddenly being taken for a ride to watch a race in Busan, Korea before staring into the void of enormous airtime being devoted to racing and gibbering from Singapore. At least, we managed to see jockey Danny Beasley being interviewed after a winning ride. Where was Hong Kong racing? No idea.

This slap hazard modus operandi shows that Hong Kong racing is not a priority for Tabcorp or Sky. With the wall-to-wall local thoroughbred racing liberally sprinkled with greyhound racing and harness racing, where exactly does Hong Kong racing fit in? Or is there even a place for it in what is a very crowded environment?

Wagering and information share a symbiotic relationship with each other. In Australia, this relationship was starkly demonstrated when the vision blackouts occurred from time to time while Tabcorp and its broadcast arm Sky and Racing Victoria declared war over broadcast and vision rights with a resulting nosedive in wagering revenue. Apply this same scenario to the Hong Kong racing product, and it is simple to understand how wagering cannot just be improved, but can sky rocket, and equally why wagering on Hong Kong racing has been low and stagnant.

Wagering on Hong Kong racing can be, and is an opportunity waiting to happen. It desperately needs to be revved up and marketed and promoted so that the lucrative financial benefits can be enjoyed both in Australia and in Hong Kong. There can be no valid reason or alibi for Tabcorp and Sky with their three broadcast channels, their on-line platforms and retail network to not get off their backsides and turn wagering on Hong Kong racing into a “honeypot”.

Park the word co-mingling to the side and just work on providing the basics – quality and detailed information which can be easily accessed and readily available at no cost to punters. Provide certainty with ‘live’ race vision on a dedicated channel, and develop a quality marketing and promotion program to grow the racing products. If Tabcorp and Sky wish to continue with their hotch potch mix and match racing coverage on their own channels, then why don’t they become a tad more creative and allow their broadcast rival Racing.com to show Hong Kong racing? After all, it can only benefit their bottom line by boosting revenue.

Maybe we’re wrong, but, more and more, this partnership comes across as being knee jerk corporate lip service and furiously burning joss sticks hoping to hell that no one at the HKJC notices. And here, the HKJC can’t kickback and think these problems will disappear- in time. There’s no time like the present, and there’s no time for time wasting.

Co-mingling or whatever it might be called in the near future certainly has legs and a future that is Now. For it to work, however, its Information Highway must be totally enhanced, and where all bases are covered and the players have all the information when they want it, how they want it and where they want it.

All this also applies to simulcasts. There is nothing that can be Information Overload. The customer/the punter want that buffet so they can pick and choose what they want based on the information given. How many in Hong Kong who might wish to bet on international races have heard of Darren Weir, Robert Smerdon, Ciaron Maher, Kris Lees, John O’Shea, Chris Waller or even Gai Waterhouse? Not many. Are they familiar with names like Blake Shinn, Brenton Avdulla or Ben Melham, Craig Newitt or Mark Zahra? Of course not. Why would they need to unless these names are relevant to simulcasts- and betting on these simulcasts?

And here, we come back to the Information Highway aka Content. No one is going to waste their hard-earned betting blind. That’s not what horse racing or “playing the ponies” is about. It’s about having a level playing field and yet another reason why content MUST be king- relevant content that’s attractively packages and presented on every delivery platform available today- and made available for free.

2 Responses to CO-MINGLING: WHAT’S IN A WORD?