Let’s face it, if you were born after The Handover in 1997, there’s not a helluva lot to do in Hong Kong other that being dragged kicking and screaming by the girlfriend to shop till you drop, take in a movie, or what’s really “trending” in this city these days- taking part in protests.

Sometimes it’s difficult to come to grips with what these protests are about, but as a student leader recently explained, it comes down to his generation feeling they’ve inherited a dud- a dud when it comes to the future of Hong Kong. Their future. Without any “consultations” with them, the seed was sewn, the deed was done, and they feel they have inherited this One Country, Two Systems formula that doesn’t work for them. Why? They’re angry that they never asked for it, and have been told by the city elders to not make waves- to accept everything that’s come before with no questions. But this is not how Hong Kong works today. Silence is no longer golden. Neither is making anger a strategy. And with the rise of separate groups like Scholarism and Hong Kong Indigenous, both demanding localism and independence from Beijing, one has to wonder if these young leaders have heard of the basic strategic rules of any social movement: To unify your ranks and divide your adversaries.

But to the dreamers and idealists, well-meaning as they might be, they only have to look closely at very recent history to see and hear the ominous warning signs and sirens going off. Remember the Arab Spring? Yes, it promised so much and delivered, well, chaos and a series of civil wars and spawned the birth of an Islamic State. As anger intensifies, so does the pent up payback and retaliations, and that’s when the genie well and truly gets out of the bottle. These young, well-intentioned radicals might remember that the grass is not always greener on the other side.

THE PROBLEMS WITH THE MANY FACES OF HONG KONG

Not making waves, and facing a political tsunami are two very different things while going down that crazy river. And the way things are going- downhill extremely quickly- Hong Kong better batten down the hatches. The days of turning the other cheek are gone along with expatriate packages, and a fair skin being a passport to a free ride on the Hong Kong gravy train. The colonial days of the FILTHs- Failed In London Try Hongkong- who ended up landing all the plum jobs here and lived la vida loca are well and truly over. There’s a new group of young local sheriffs in town with guns blazing and very different priorities to change the landscape of this city.

For older Hongkongers, and us Hong Kong Belongers, we’ve never known a Hong Kong as what we have today. As a weird segue, we have also never known a Hong Kong without horse racing. From waiters and taxi drivers to shop assistants etc, horse racing is one of the few stress busters for this “customer demographic” in a city of so many contrasts it’s often difficult to know exactly where one is. Recently, it feels as if we’re on some arid land screaming at the moon.

The longtime local racing fan can talk for hours about horses like Throgmorton, Kentucky Lad, Co-Tack, Makapura Star, the great Silent Witness, Viva Pataca etc, and the days when former champion Hong Kong jockeys- everyone from Kenny Kwok and Cheng Tai-chee aka Top Cat, below, to Gary Moore and Tony Cruz- ruled the roost. 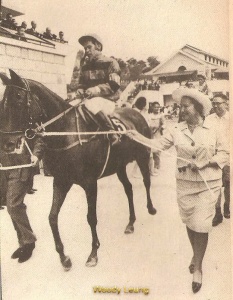 There were then the years when friends of the expat jockeys and privy to their information were Scottish footballers like Walter Gerrard and Derek Currie, below, who enjoyed a certain Rock Star status.

There was also the dark presence of the very odd racing writer named John Hardie who was almost the PR man for the Moore family. Even stranger was Ken Martinus who owned the racing bible known as Lowans, and was the designated “running dog” for the brilliant and extremely people-savvy Ivan Allen. Mr Allen knew how to put useless people to good use. 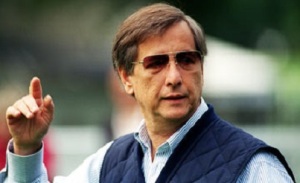 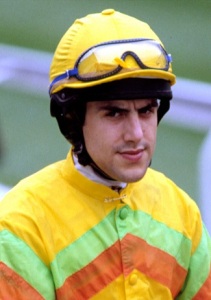 What a long, strange trip it’s been to arrive where we are today- Hong Kong, once, home of the pukka Royal Hong Kong Jockey Club, and today, the HKJC, the most successful racing organisation in the world, with racing twice a week at two race tracks, and where integrity in racing is not some vapid buzz phrase, but a constantly evolving machine that ensures everything plays strictly according to the rules while giving much back to the city through its Charities Trust.

Add to this, the lure of some of the best riders in the world, global sponsors, Group 1 racing, and a Hong Kong no longer riding gingerly on the coat tails of a post-1997 city in transition. What you have is something that transcends mere horse racing.

For many of Hong Kong’s elder statesmen, horse racing is a way of life. The younger generation and student activists might be fighting for complete independence from Mainland China, and doing all they can to change the Basic Law and be masters of their own destiny, but in that parallel universe of sliding doors, the generation before them, and the generations even before them, don’t really care. There are bets to be made and living the dream twice a week of trying to become rich enough to retire. This is a customer demographic with no time for Gai Waterhouse-type fairy tales about “living the dream” and horse ownership. They’ve run out of time and money for that. They also know their maths.

These are twice-a-week race goers and punters needing that four hour break from their daily routines. It’s that stress buster mentioned earlier. It’s far less addictive than Valium and never to be confused with the desperate world of casinos with desperados who are out still riding fences and doomed to keep drawing the queen of diamonds who’ll beat you if she’s able.

Today at Shatin, one type of horsepower met another kind of horsepower when BMW sponsored the $18 million 2016 Hong Kong Derby, the 143rd running of the annual race that the rich and powerful owners like Pan Sutong want to win for face and money- money that’s, well, priceless- and bragging rights.

There might have been better fields in the past, but to the loyal group of local racing fans whose maximum outlay for the entire day would probably not exceed more than $3000, this Derby held more interest than most. 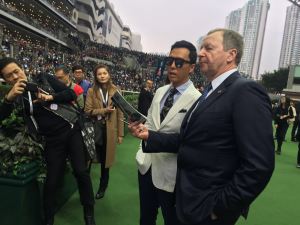 It was anyone’s race to win, and everyone had their opinions- everyone from retired civil servants and the man in the street to our friend Alessandro, the passionate Hong Kong racing fan, and owner of the popular Italian eatery Da Domenico. 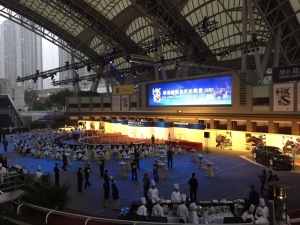 There might have been the big spenders who made the Hong Kong International Sales rattle and hum on Friday evening to the sounds of big ka-ching, but these relatively small time players have always been the heartbeat of racing in Hong Kong. Let’s never forget that and hurtle down the elitism route. It’s doesn’t fit into the Hong Kong 2016 model.

Together, they contribute towards the Big Picture of racing in Hong Kong.They are loyalists who have been part of the long ride and have no intention of jumping off the bandwagon now.

New boy and champion South African jockey Gavin Lerena winning the first race of the day- and the first winner of his riding stint in Hong Kong aboard Fast And Furious for countryman Tony Millard- was a low key Class 5 start to the day as crowds were still coming through the turnstiles. For Gavin Lerena, below with Tony Millard and connections, it was good to see him get off the mark and get that albatross off his back. 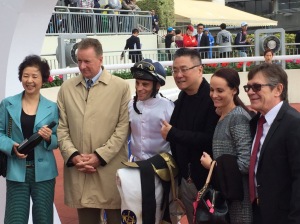 Despite the grey clouds that kept the Age Of Aquarius at bay, and refused to let the sun shine in, and humidity that would have even sapped Batman, there was a winning double and the Jockey Challenge for visiting jockey Tye Angland, three wins for trainer Benno Yung, wins for Chad Schofield, Keith Yeung, Brett Prebble, and a world class riding double for Ryan Moore, below, after winning race 8.

After eight races, there was still no winner for Hong Kong’s two leading riders- Zac Purton and Joao Moreira.

Then, after months of pontificating and thinking and rethinking what might happen, at around 5pm, the paddock parade began for the race that mattered. 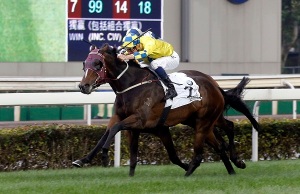 In fact, it was a Moore Quinella with Victory Magic ridden by Purton coming second, and another example of John Moore stamping his authority on these big races and winning his fifth Derby in the process. 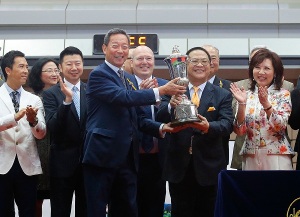 It’s hard to believe that here is a world class trainer who was once an average jockey riding horses like Carrington and Harrington for owner Herbert Kees. He’s gone from being Clark Kent to Superman with no fear of kryptonite. 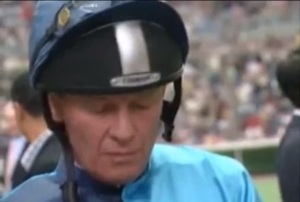 Was it a great Hong Kong Derby? Not really. Was it an anti-climax after all the pre-race hype? Let’s just say that the weather gods conspired to dull the end result. Leave it at that. That’s racing.

After the usual post-mortems and “I told you so’s”, the loyal band of Old School racing fans either went home happy with their winnings, or else were, and are, only too happy to return to fight another day- Wednesday at Happy Valley to be exact.

Also planning to fight a different kind of fight another day- it might even be as soon as tomorrow- is Hong Kong’s angry young generation demanding complete change. But here’s the thing: As the Umbrella Movement understood, screw with everything, but never disrupt horse racing. It’s in Hong Kong’s DNA, and no amount of pressure to bring about political changes will ever rob this city of enjoying those four hours of a long-running horse opera.

If only horse racing can bridge this generation gap affecting Hong Kong these days. There are those days when one believes it can- that in this strange world of horse racing with its various twists and turns, behind even the greyest cloud, there’s always a silver lining.