Horse racing fans would have enjoyed one showcase in particular at this weekend’s Longines Masters tournament: the HKJC Race of the Riders. This event is a partnership between Longines and the Jockey Club whose world class jockeys Neil Callan and Joao Moreira aptly demonstrated that their horsemanship talents go well beyond race riding. 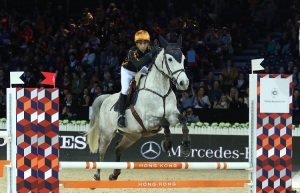 Watching this event reminds us that jumping, horse racing, and all equestrian sports have one common denominator: the horses.

Of course, if you’re a horse person, this is stating the obvious but then you’ll also know that these worlds rarely interact with each other, particularly at the highest levels of competition. For non-horse people this lack of connection may seem a strange state of affairs: if you love horses and horsemanship, why wouldn’t you enjoy any sport that involves horses?

There are no simple answers to such questions. It seems as though “back in the day,” there was more connection between these worlds because Thoroughbreds were seen both racing and the equestrian sports.

These days, however, the higher up the levels of equestrian sport one goes, the less Thoroughbreds one tends to see. That’s because, for decades, registered/purebred Thoroughbreds have been replaced by Warmbloods, Hanoverians, Oldenburgs, and others as the breeds of choice for equestrian sports. 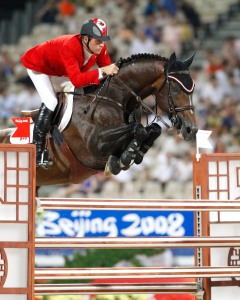 With some exceptions, the demand for these “sport horses” has meant that the very versatile Thoroughbred has been largely relegated in the equestrian world to lower level competitions.

From a racing marketing point of view a question to ask is: Could racing benefit from rejuvenating or deepening its connection with high level equestrian sports? Given the horses, the people, and the wealth in both racing and equestrian sports, surely there are many opportunities to cross promote. Purists might descry the idea but in this very integrated world, where technology facilitates collaboration and “open source” thinking among often vastly disparate voices, purism is archaic and out of place.

Connections between the racing and equestrian world do exist of course. The HKJC Longines partnership is a case in point. In recent years too, the world governing body of Olympic equestrian events, the Fédération Equestre Internationale (FEI) has made concerted efforts to connect all sports involving horses. From 2006 to 2014, the President of the FEI was Princess Haya bint Hussein who represented Jordan in jumping at the Sydney Olympics and is married to Sheikh Mohammed of Darley, Godolphin, and Dubai World Cup fame. 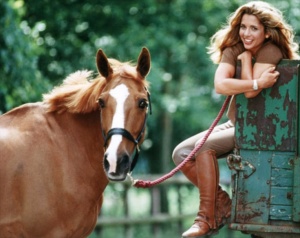 And, there are other examples. In the eventing world there are a number of high level horse trials around the world, one pinnacle being Rolex Kentucky, the prestigious, hugely successful 3 day horse trial held at Kentucky Horse Park. The Park exists to celebrate the Thoroughbred and has been home to many famous retired race horses (the great John Henry was a long-time resident); and, hosts many equestrian special events including, in 2010, the Alltech FEI World Games. The Park is heavily promoted to tourists and racing fans alike and, in North America, for every child who takes lessons and rides at the “Grasshopper” level of eventing, attending Rolex even as a spectator is “The Aspiration.”

Obviously, premiere equestrian events have a significant prestige factor and draw certain kinds of spectators for that reason alone. However, one thing you would sense even as a newbie at an event like the Longines Masters is that horse shows are exactly that: a showplace for the horses and the riders.

This is a distinct advantage over racing, which would not exist without the horses but yet often comes across as only about the punt. This is not to suggest that there is anything wrong with encouraging responsible gambling or that dedicated punters should not be treated well. However, since racing is constantly wringing its hands, if not fearing the end, because the current hard core demographic is white-haired, in thinking and in numbers, shouldn’t every potential opportunity to find new fans and players be enthusiastically embraced?

If the people who attend premiere equestrian events, who love horses, and perhaps are part of the equestrian world in some way — they ride as amateurs, their children take riding lessons, etc. — could experience racing in a relevant way that’s not all about gambling, but is about the horses and the riders, perhaps they could become new racing fans. 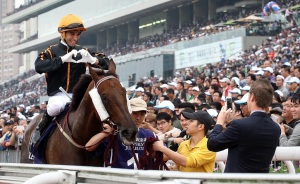 Attracting this audience, however, would require a marketing strategy which may come with a caveat: they may not wager much if at all. This fact may make some in racing think such fans are not worth pursuing and/or acquiring. Still, mixed in with those fans who may not add much to racing’s actual bottom line initially is something the sport is struggling to find: potential. And, at least here, in these already horse-oriented people, one of the most challenging things about the racing game is solved because the audience knows something about horses. Wooing of any kind has to start somewhere. Why not begin with people who may become friends and/or lovers and sometimes both?