SATURDAY AT SHATIN: A MESSAGE IN A BOTTLE #HKIR

It might have been a lowly class 5 race, but it produced a finish that belied the quality of the horses involved and underlined the competitiveness of Hong Kong racing- a short head and a head separating the first three horses- and with Joao Moreira again demonstrating that it doesn’t matter what race it is, he’s there to win. When local rider Howard YT Cheng looked to have the race all parcelled up on Oracle and Douglas Whyte on O’Socoole looking to run the quinella, Moreira, on the inside, never stopped pushing and coaxing his ride Brilliant Monkeys first past the post.

At this point, a note to visitors and first timers to Hong Kong racing: Yes, there are strange English names given to horses mostly to do with gold, treasure, wealth and, well, fish, but none of these names matter to their owners who have christened them with what matters most to them- their Chinese names. Hong Kong has a local trainer named Man Ka-leung. His English name? Manfred. How many racing jurisdictions have a Manfred Man training horses and probably singing “Do Wah Diddy Diddy” while he works? Great stuff. 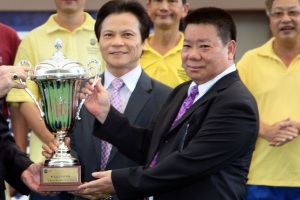 Way too often us foreigners and strangers in a strange land forget that we’re guests of Hong Kong Belongers. We’re “gweilos”, “gweipors” and “sai yans”, and very much a minority. Respecting our hosts and understanding their culture goes a long way.

Getting back to the racing on Saturday, Able Friend might not have won the Longines Jockey Club Mile as many had expected, but no one could have begrudged the great Gerald Mosse taking the race by the scruff of its neck and winning aboard the Tony Cruz-trained Beauty Flame.

On a day when Mosse learned that he had lost his wonderful old friend Red Cadeaux, it might have been a bittersweet victory, or, looking at it positively, the stars might have aligned to make this win his tribute to Big Red.

As for Tony Cruz, he’s not Hong Kong’s favourite racing son for nothing. Once seen as being one of the greatest jockeys in the world who rode for some of the biggest owners in Europe, he won almost every big race as well as being Hong Kong’s Champion Jockey many times.

As a trainer, his association with the great Silent Witness has a special place in the history of Hong Kong racing and in the hearts of local racing fans. On Saturday, his tremendous popularity was there for everyone to see when he received his trophy for training Beauty Flame. The Tony Cruz Fan Club cheered their idol for this winner and his magnificent training effort on the day- four winners on the day.

Being the brilliant horseman that he is, “Cruzy” as he’s affectionately known, adopts a horses for courses strategy when it comes to jockey engagements, something borne out in his four winners being ridden by Mosse, Douglas Whyte and a double from Neil Callan. And what about each of those rides- every one brilliant in their own way and another fabulous testament to the talent within Hong Kong’s jockey ranks?

The cameo from Christophe Soumillon aboard the Richard Gibson-trained Gold-Fun to win the Jockey Club Sprint was the icing on the cake. Add to all this the winning rides of Zac Purton and Brett Prebble and the inspirational training efforts of ​my good friend ​Caspar Fownes to bring Military Attack back to take out the Longines Jockey Club Cup, and great to see his Lucky Nine returning to something like its best. 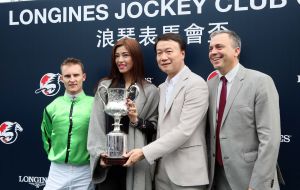 What we had at Shatin on Saturday was everything to market the upcoming Longines HKIR Week- something that twittering, hashtags, and money can’t buy. It showed Hong Kong’s United Nations Of Racing at its best and against the backdrop of the most cosmopolitan city in the world. This meeting should be bottled and sent to every first timer coming to Hong Kong so they can understand the pride we have in our racing- and how protective we are of it​ and why we demand only the very best in everything and every one connected with the sport.​