Reader Syd Knee asks, How many trips to the racing well is too many? #RedCadeaux‏ 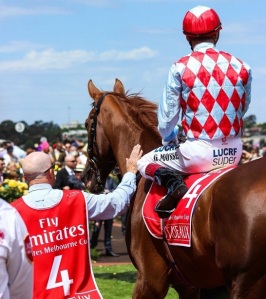 I am as saddened as any other at the news of the passing of the marvel, Red Cadeaux. However this may be the time to discuss the merits of asking any horse, even one as tough as this one, to do quite that much.

Red Cadeaux raced 54 times and travelled internationally for 5 consecutive years. He contested the Melbourne Cup on 5 consecutive occasions. It has been my observation that long-haul travel is difficult for horses, as is to compete in even one Melbourne Cup. Yet the fact that this horse was able to do both was against the odds. So much so, that I would argue that the connections were cheating the odds, at least in the end.

By all reports, trainer, staff and owner were more than kind to the horse, and they are grieving with the rest of us, and I don’t doubt their good judgement and horsemanship.

However, it would have been easy for them, as it was for us, to be swept up in what was one of racing’s great stories, the kind of story that served to attract others to the sport that we all admire.

Amidst all this, the race clubs like HKJC, VRC, ATC, the media, and the fans would have been serenading connections, asking “will he be back for a 5th tilt at the ‘Cup? Another HK Vase? Another Queen Elizabeth? BMW? A decision that few of us would envy to have to make, and the horse obviously told them yes, so that is to be respected.

Red Cadeaux was over 9 and a half years old on that fateful first Tuesday in November and I wonder out aloud if any horse of that age should be allowed to compete.

To be fair, he did not race at all until he was 3, but if we don’t allow them to race until two, shouldn’t there be an upper age limit or a career starts limit, say 50 or 60?

Makybe Diva managed 3 Melbourne Cups, 2 Sydney Cups, a Cox Plate and BMW etc and yet was retired at what was effectively 6 and a half years old and 36 starts. This followed what was arguably her greatest performance and the greatest performance by any horse in Australia in our lifetime – 3:19.79 on a Soft 5 carrying 58kg. There was not much left to prove, and I don’t think there was much left for old Red to prove either.

Vale the old marvel, thanks for the memories. Sincere Sympathies to the connections.

7 Responses to Reader Syd Knee asks, How many trips to the racing well is too many? #RedCadeaux‏