In a recent news report, China Horse Club (CHC) owner Teo Ah Khing discussed his Club’s recent race meeting at Wuhan on Mainland China. Aside from the usual commentary by Teo on how, through his involvement in the design of Meydan Racecourse in Dubai more than 5 years ago, he became a passionate horse owner with altruistic desires of sharing his passion with others, he makes some very interesting comments about on course and off site participants at Wuhan.

The race meeting at Wuhan in September this year was the fourth held there in partnership between the CHC and the China Equine Cultural Festival. From other reports about past race meetings on the Mainland, these race days take place using horses generally supplied by Coolmore, a China Horse Club member, in front of on course spectators. No gambling is allowed.

Many people involved in horse racing across the globe would agree that Mainland China, with its vast population, could be the “final frontier”/the savior of the sport, which, outside of a few jurisdictions –namely Hong Kong — has seen year over declines in betting handle, foal crops, and on track attendance figures. For those for whom horse racing is truly a business from which they derive income, Mainland China is at once a great hope and the potential gravy train. Given how racing on the Mainland ended so tragically with mass euthanasia of hundreds of horses last time there was a serious effort to bring racing to the country, everyone who thinks the potential exists is taking baby steps and making no promises. Hence, Wuhan.

Because there is no gambling allowed at the Wuhan meeting, or anywhere else on the Mainland, and there have been quiet rumours about the quality and suitability of the horses involved, it is difficult to imagine that these races hold much appeal for anyone beyond the horse owners and others directly involved. Every year, fewer and fewer people, after all, watch horse racing anywhere in the world outside of Japan and unique locations such as Hong Kong unless they are directly involved with the horses that are running, work in the business, have skin in the game, or are taking part in a signature event such as the Dubai World Cup, Royal Ascot or the Kentucky Derby as a social event.

Knowing this, Teo’s additional comments about Wuhan become even more intriguing- or ridiculous- depending upon your point of view. He is either a visionary or else a combination of Willy Wonka, Donald Trump and PT Barnum. But he cannot be ignored for a variety of reasons.

Consider, for instance, the two figures he mentions: 10,000 on track spectators, 600,000 viewers on live stream. President of the China Horse Club, Eden Herrington, another interesting character in the ever-intriguing “horse racing in China” jigsaw puzzle, who worked on the China Equine Cultural Festival that staged the Wuhan race meeting, echoed these figures publicly as well.

For any race track to get 10,000 on track spectators on a relatively minor race day, would be a coup these days. It begs the question, who would physically go racing in China where the sport has been banned for more than 60 years, when most would not be owners or otherwise involved in the sport, and where they were not given a chance to gamble? It’s hard to believe that Teo found such a large group of people within this population who are as passionate as he is about horse racing to come to the track.

Second, and perhaps more important, is the figure he quotes for the size of the off course live stream audience. Six hundred thousand viewers is a lot of viewers for any kind of event these days, and we have to ask, “Who are these people?” And, more, how was live streaming in China possible given how challenging it can be for outsiders to work with the government and its censors, especially when those outsiders have never made specific reference to any supportive government officials?

Ask about the difficulties through censorship and other governmental red tape faced by the music industry- a much bigger and consumer-friendly driven industry that has been touting the “Mainland China is potentially the biggest music market in the world” come-on for almost two decades. This potential has yet to be realised.

Having said all of this, it’s worth qualifying all the above about CHC with a comment about the consequences of withholding or omitting information. Although Teo does mention the release of a documentary about the Wuhan meeting at the end of this month, one wonders why he isn’t more straightforward about these figures- now?

Whatever happened to describing a successful business project as a partnership between one’s own business and whatever other entity or organization helped to make the success happen? Thus, why don’t we hear Teo saying, “China Horse Club live streamed the Wuhan meeting to 600,000 viewers located in A, B and C countries or cities or provinces using XYZ streaming service?” The fact is that when pertinent information such as this is left out, speculation and doubt set in.

Only extensive research shows that China Horse Club did partner with another organization to effect the live streaming on race day. Apparently, the media partner they used is called Daluma, which appears to be a general online all-things-horse (equestrian, polo and racing) channel located in China. If the documentary describes how Daluma works in terms of handling such vast numbers of Mainland China-based visitors to its live streams, it will be very interesting watching indeed. Having said this, it’s important to remember that not everyone who confronts such a huge lack of information will respond in a like manner. Instead, they will be left thinking that there is more to the story, and if it’s not being told up front, what’s there to hide?

Depending upon one’s point of view, the continuing story of China Horse Club, now with this added dimension of the viewing figures for Wuhan, can mean several things. If you are a believer, you may see Wuhan and the recent successes of the China Horse Club – such as the win of Beat Of The Drum in a US $55,000 Allowance race at Santa Anita Race Track on October 9th – as evidence that Teo Ah Khing is on the cusp of that final frontier. You may believe that here is a man and his Club who will be successful in re-introducing racing to a Chinese audience- a Chinese audience in Mainland China as opposed to the millions of Chinese everywhere else in the world. 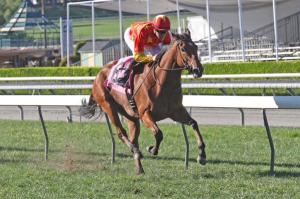 Cynics, of course, will think otherwise. Here, they will say, are more rainbows and sprinkles about “Living the Chinese Dream,” whatever that really means. For racing or any other business, breaking through all the barriers to get into China is not as simple as saying you want to promote China overseas and have a few winning race horses in various jurisdictions.

Some cynics may even go so far as to suggest that the story and business model of China Horse Club, with its expensive memberships offering “glittering” experiences to the cash rich who join, is reminiscent of M1NT, the elitist luxury membership club transplanted from the UK after a chequered past to Hong Kong. M1NT failed here, and moved on to Shanghai, where it had a successful run for a few years, and continues today, despite the cast of characters led by its founder and salesman extraordinaire Alistair Paton having seemingly disappeared from sight. M1NT and China Horse Club and the dreams and “glittering” lifestyle and experience promised . . . it’s an interesting analogy.

The point of all of this, and of previous posts about China Horse Club is not to trash anyone, but more of a way of asking, what is going on? Really? Everyone in the horse racing industry is curious, or anxious (depending on their pov) to know. Is racing really going to be brought back to China? If it is, when, and in what kind of guise and format? And then what? And, if it isn’t, what is the end game of the China Horse Club?

If they are not going to end up bringing racing back into China, then why are they called the “China” Horse Club? Or even, how long will this members only Club be a “horse” club? Or will it switch horses in mid-stream?

1 Response to CHINA HORSE CLUB: MORE BEATING OF THE DRUMS‏