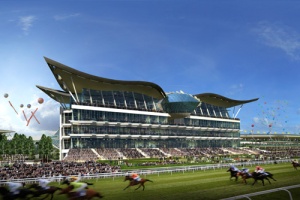 “There are already no fewer than 200 breeders there, big and small,” Teo said. “And some have stallions with notable pedigrees, some from Ireland.”

While noting that there is still some way to go before a Goff’s type of sale takes place, he also said that breeding has increased in China to such an extent that a recent sale saw almost 300 horses auctioned.

When asked whether there were would be an advanced breeding industry on the Mainland by 2050 Teo commented, “We have our own programme called Vision 2020. We hope by 2020 we will see regular races you can watch on TV in China, as well as overseas races, and you will be able to play a game or two of wagering on your phone.”

It’s interesting to read these recent remarks because they suggest that Teo and his China Horse Club believe that they can do what no one else has been able to do in almost 65 years: revive commercial Thoroughbred horse racing on the Mainland. And, he believes this can be achieved in less than 5 years.

Teo’s China Horse Club is another in a relatively long list of attempts to revive racing on the Mainland including the disastrous Beijing Jockey Club which was shut down in 2008 because the Club failed to persuade the Government to allow commercial gambling. Distressingly, following the BJC’s closure, 600 horses were destroyed.

China Horse Club has existed and has been working away at reviving racing since 2010. The question now is where are they at? What have they accomplished so far that will give them what they need to reach the 2020 goal? In this Internet world — where what you see online is often times not all what you get in real life — how do we judge an organization’s accomplishments, or even determine what they do, how they’re funded, whether they actually even exist in any “bricks and mortar” form?

Back in 2010, for example, there was a lot of press for the China Horse Club’s development at Tianjin, which was to be a multi-billion dollar development built in partnership with Dubai’s Sheikh Mohammed. In spite of the press and the rather impressive Meydan-like architectural renderings posted online (and on the existing Star holdings website which is devoted to this project), nothing seems to have come of this. Yet, now, a simple online search suggests the opposite unless you read the results carefully. If you do, you’ll note a lot of “plans to build” and “will be building.” Perception is nine tenths of reality for many people and in the end what the search results imply is that China Horse Club is going to be opening its 4,000 stall Equine Culture City soon.

Significantly, when searching Google (as a broad search in English for both any country and for Hong Kong) for the words China horse racing, the China Horse Club appears above the actual and very successful racing currently going on in China via the Hong Kong Jockey Club. Perhaps Google is confused and the algorithm has not figured out that Hong Kong is part of China. Or, perhaps the Hong Kong Jockey Club is not helping itself by promoting this aspect of their business in the context of search or, maybe, China Horse Club is doing something to affect their place in the search results. If CHC is doing that – running pay per click ads on Google for instance — they are not doing anything wrong. Indeed, it can be good business practice these days to at least run some PPC ads if for no other reason than to help determine the value of certain keywords. The only problem is that as businesses attempt to be achieve a top or above-the-fold place in the search results, the results themselves can be skewed so that a newer, less established organization’s importance outweighs that of a much larger and long established organization such as the HKJC, the world’s largest racing entity — and which it’s worth repeating is located in China.

It’s true that China Horse Club have received a lot of press; Teo seems to be everywhere, looking sort of nerdy and awkward, beside all sorts in the racing world such as Shiekh Joaan of Qatar, The Queen’s trainer John Warren, and Coolmore’s John Magniere. Sales reports also show China Horse Club agents as buying a number of horses including, most recently, an expensive Frankel filly which according to a Club press release was acquired after “fighting off the world’s biggest racing stables and breeders to secure [this] jewel of Goff’s Orby Sale.”

The Club also has horses racing in several jurisdictions around the world. Recently in NSW, for example, the Club’s horse First Seal was honoured as “Queen of NSW racing” during what the Club described as “a glittering ceremony.” The Club has also acquired interests in several top stallions including Pride of Dubai and Vancouver. And finally, in February this year, the Club hosted a members only race day at Singapore’s Kranji Racecourse meant to attract many of its Mainland Chinese members.

All of these activities are well and good and, from the outside looking in, no one can knock the Club for working hard to provide what it calls an elite racing experience for its members. Having said this, however, it’s unclear whether, for example, large numbers of Chinese members attended the members-only race day in Singapore and how any of these activities and even the “racing” the Club has sponsored in Wuhan, means that there will be Thoroughbred horse racing as we know it on the Mainland by 2020. Or, to put it another way, how will these activities convince the Chinese Government to relax a law based on a moral argument and which has been in place for so long?

Sometimes we underestimate people because of what they don’t say or we overestimate them and their power and influence because we measure their substance on what they say, how they portray themselves in the media/online, rather than by what they actually do in reality. And even from this very superficial look at the China Horse Club, what we can say is that aside from owning some horses, albeit some very good ones, the Club’s current value appears to be in its members. Ultimately, it seems to be either a really expensive networking opportunity for Club members or a multi-level marketing or MLM entity reminiscent of Amway, the largest “legal pyramid scheme” in the world, with an invitation to the Playboy Mansion thrown in for good measure, or a mixture of all three. All are legal and legitimate business organizations and, in the case of Amway, extremely profitable. However, whatever China Horse Club is or is aiming to be, it’s still difficult to see how selling this mixture of aspiration is going to help it actually revive racing on the Mainland, the operative word being “actually.”

One thing is certain: Teo Ah Khing should be admired as a great salesman. The China Horse Club website offers promises, opportunities, and “glittering” returns to members. There is a constant stream of apparently happy and profitable news, and photos of Teo and others with well-known international racing “brands,” all of which add legitimacy to the Club and are exactly what any good business and sales person would be doing. Again, though, it’s hard to see just how these activities, and the appearance of the Club online is going to help it revive racing on the Mainland.

Given this, we have to ask, what’s missing? What else – what proof – do we need to demonstrate that the Club has any hope of bringing legitimate horse racing (complete with a proper breeding registry, appropriate international standards that are strictly enforced, and strictly controlled commercial gambling) to the Mainland? Some involvement from the proper Chinese authorities and government officials would be a start and currently there is none, not in the news or online in any of the usual places one would expect to see such involvement. All we have is China Horse Club saying what’s going to happen through press releases and other well-known racing publications publishing these releases either as is and/or as gospel of what is happening. In the end, it seems like a mirage or an oasis depending on your perspective.

And, maybe that is the point. Maybe when the China Horse Club began the goal was to revive racing on the Mainland and the company is now repeating this mantra, staying true to its roots while finding that reaching that goal is tough going. As a consequence, one has to wonder whether the Club has now switched gears without saying so publicly and is focussed solely on selling the concept of elite racing in prestigious locations around the world. As a very knowledgeable friend recently suggested over dinner in Hong Kong, younger Chinese members probably don’t even want racing on the Mainland. What they want is to get out of China and experience some form of the Playboy Mansion lifestyle. If racing can give this to them through the China Horse Club, then they’ll be “into” racing.

Last week, a racing marketing professional I know told me that he sees Teo Ah Khing as The Donald Trump of racing. As soon as he said it, he changed his mind and called him The Obama of racing before finally settling on The David Copperfield of racing.

Maybe Teo is some kind of combination of all three. Whatever he is, I wonder how he and his China Horse Club would fare in the Dragon’s Den.