RULES, REGULATIONS AND TRAVEL TIPS: HOW TO GET THE MOST OUT OF HKIR WEEK (PART 10)

You Are What You Wear 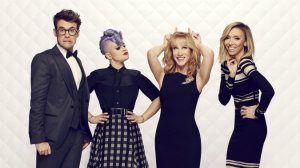 There are very few restaurants or even hotels in Hong Kong where dress codes come into play. Those that still cling on to these rules and “irregulations” are a few of those pukka private clubs still stuck in the time warp of Hong Kong’s colonial days where repetitive old bores sit around the bar reminiscing about those days so perfectly described in the James Clavell novels “Taipan” and “Noble House”, and where, for reasons only known to their members, females are allowed to wear hats, but not men. Not even if they were Johnny Depp and Keith Richards, though we doubt Johnny and Keef would be breaking down the doors to get into the almighty great big dining rooms filled with Bores Anonymous at places like the Hong Kong Football Club, and the incredibly daft Hong Kong Cricket Club, where members parade around dressed like the Putney Darts Team, but outsiders cannot wear hats- not even if they were Zorro.

As for the races, casual smart, or just plain casual is suggested for any Happy Wednesday meeting at Happy Valley. The Beer Garden is very casual with the only real no no being swimming trunks and flippers. 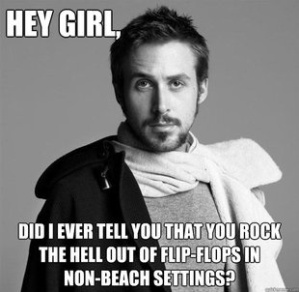 Seriously though, shorts and t-shirts for females are fine whereas for guys, the wearing of flip flops might mean being barred.

At other venues like Adrenaline, and The Gallery, casual smart would be our suggestion with even stylishly ripped designer jeans being a bit on the iffy side. Like anyone who dons a uniform, many of the somewhat “mature” security personnel manning the gates let a little power go to their heads and have been known to bar some of the trendiest people we know from getting through because they were wearing blue jeans. So, go casual at the Beer Garden, but err on the side of caution everywhere else- even at the private boxes- and go for casual chic/smart. Hats for ladies at a Wednesday night racing meeting might mean you’re in a minority, but if you wish to, well, get a head, go ahead. 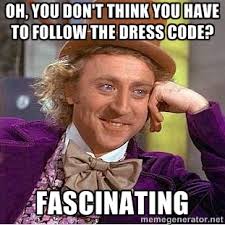 Of Mice And Mad Hatters

For the races at Shatin on December 13, be a mad hatter. There’ll be plenty of others there though, for some reason, the local ladies, who are usually kitted out in absolutely stunning outfits, come undone when they bung a chapeau on their heads. Perhaps clothes from Shanghai Tang were created to be a standalone- and not a brand that just anyone can pull off? And, let’s face it, unless Kate Middleton. not everyone can pull off wearing a hat. It’s the same as wearing a sarong with a Mohawk and not being David Beckham. Mr God was very miserly when handing out good genes.

Gawd, how we’d love to have the HKJC invite E! Channel’s Fashion Police to cover its HK International Week. 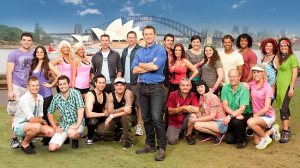 Getting back to the races and getting TO the races, for the Wednesday HKIJC meeting, remember it’s an early start- there are nine races that evening- so try and get to Happy Valley Racecourse by 6pm. The easiest mode of transport is by footing it if staying in Causeway Bay, Wanchai or Happy Valley itself. Remember to check out all the hotels within walking distance- the Crowne Pacific, the Excelsior, Grand Hyatt, Renaissance Harbourview etc. If in Central, North Point, Quarry Bay- a very underrated part of Hong Kong when it comes to restaurants and bars- hop on a tram.

There are some idiots trying to have these modes of transport that’s such a part of Hong Kong history- they’ll fail- but there’s something quaint and old worldly in a good way about a tram ride and which drops you right in front of Happy Valley Racecourse. There’s also the underground- the MTR- with the closest stop to the track being the Causeway Bay station, whereas if thinking about cabbing it, beware: Taxis go off duty every day in Hong Kong at 11am and then at 4pm. For over an hour after these breaks, it’s impossible to hail one as the only place they’re going is, like E.T. home.

From Here To Eternity

Whatever mode of transport you take, get dropped off at the Members Entrance if you have a Guest Badge, or the Public Entrance if paying the $10 fee to get to the Beer Garden area which is right next to the Paddock Parade area.

If going straight to Adrenaline, take Entrance C and take the elevator up to the Second Floor. There’s no badge required. Just an Entrance Fee of $470 only on IJC night, $370 on other nights, that includes a free drink and a very good International buffet. The more hardcore punters- very well dressed- position themselves downstairs where there are the IBU betting tables that must be seen to be believed. It’s like being on the Starship Enterprise. 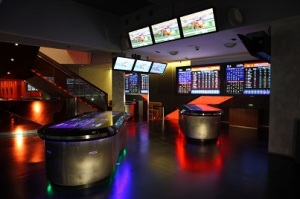 The ‘live’ music is upstairs- the best band in town fronted by singer Jennifer Palor- whereas both floors have long balconies offering a spectacular view of the racing along with close circuit television sets with all the odds and sods and unevens, a bar, good service, and conveniently located betting counters.

If you wish to go downstairs and get down and personal with the racing, you need a Guest Badge. The best place to watch the races is by the railings facing the Winning post and, if you have the clout to get backstage where the Happy Wednesday dancers hang out, this is where you’re within touching distance of the riders going to the 1650 metre start, and who usually ride back after winning a race to Hi Five the fans.

Still at the Beer Garden, everywhere around you are kiosks for different beers and wines while, if overcome with an attack of the munchies, the venue has a food court comprising McDonald’s, a KFC and a number of outlets serving kebabs, corn on the cob, and various box dinners- mainly Chinese cuisine and a very good char siu fan- barbecued pork with rice.

The Beer Garden really is the best outdoor club in Hong Kong- with the added attraction of horse racing and betting counters everywhere. Find yourself wanting to know anything about everything, there are plenty of Happy Wednesday Ambassadresses walking around. You can’t miss them. 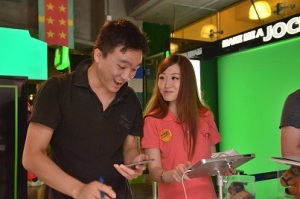 As the night meetings end around 11pm, try walking it again- to Causeway Bay or Wanchai for a few hours at places like The Wanch or Dusk Till Dawn, Amazonia, HK Cafe, or the New Joe Bananas. It’s a bit of a bunfight swimming against the current with the rest of the thousands snaking their way to wherever they’re going, so here’s a tip: Take the underground pass about 300 metres from the main entrance. It gets you across the road where grabbing a taxi is easy. Either that or kill time at one of the new pubs that have opened up opposite the Public Entrance and close to the main tram stop.

A Day At The Races: Shatin

As for getting to the races at Shatin on Sunday, the MTR is one way to get there though we strongly suggest having a hire car to get you to and from the racecourse. Once there- and even in a Private Box or at a Member’s table for lunch, make the time to check out The Hay Market, one of the finest venues to grace any racecourse.

So, the International Races have been run and won, the fireworks have gone off, the post-mortems and all the Ifs and Buts have been discussed ad infinitum, it’s the last night in Hong Kong, and so, what’s there to do?

Remember that it’s a Sunday, and even in the hustle and bustle of this city, with Monday being a workday, things tend to wind down.

Back in the day, many would meet up at the Champagne Bar of the Grand Hyatt and make plans from there.

Many being creatures of habit will go through the same routine again while others who say, “Mate, we didn’t come all the way to Hong Kong to see the same faces we try to get away from back home”, go straight to Wyndham Street, have a drink in any of the bars down the strip, then take the Central escalator into Elgin Street in Soho.

Here, on the one street, you can decide, whether for dinner, you feel like going Thai, Cantonese, Manchurian, Italian, Szechuan, Shanghainese, Nepalese, Indian, Greek, Spanish, Peruvian, Argentinian, or whatever, and have a nightcap at intimate Jazz club Peel Fresco while checking out the ‘live’ music. 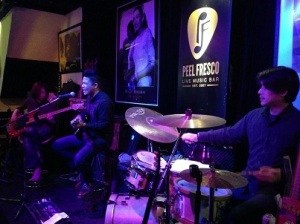 We’ll be at one of our favourite restaurants on Elgin Street- Bistro Manchu- and chilling out with friends while inhaling the steamed dumplings, the Sizzling Cumin Beef, the Chilli Shrimps and the Spicy Shredded Chicken Salad.

And if the mood hits us after dropping by Peel Fresco, we’ll just have to check out Feather Boa (G/F, 38 Staunton Street, SOHO, Central).

Yeah yeah, the tiny club is known for its Chocolate Daiquiris, but there’s always a funky scene going on here. Feather Boa is a favourite hangout for stewardesses having a layover in Hong Kong and wanting to spread their wings, late Sunday night or not. And often, the madness starts all over again…

WHERE TO STAY (AND KEEP AWAY FROM): YOUR CONTINUING GUIDE TO GETTING THE MOST OUT OF HKIR WEEK (PART 9)

GETTING INTO IT AND GETTING AWAY FROM IT ALL: YOUR GUIDE TO GETTING THE MOST OUT OF HONG KONG AND HKIR WEEK (Part 8)

THE MUSIC THANG: HOW TO GET THE MOST OUT OF HKIR WEEK (PART 5)‏