GETTING INTO IT AND GETTING AWAY FROM IT ALL: YOUR GUIDE TO GETTING THE MOST OUT OF HONG KONG AND HKIR WEEK (Part 8) 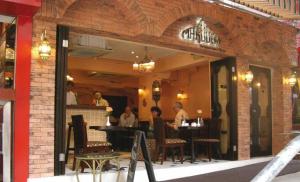 Back in the day, one might have frequented Marouche for its Lebanese cuisine, especially the Sautéed Chicken Liver and various hummus and dips, but, these days, the restaurant is a weird pit stop on the way home to see, as Bob Dylan once sang, all those clowns and jugglers doing tricks for you- and with the freak show usually starting at around 2am on a Friday or Saturday.

Sure, Marouche still serves Lebanese dishes, but we won’t be going out of our way to recommend any. Chefs have come and gone, and we have no idea who’s in charge of the kitchen these days- or even if anyone is. What Marouche has going for it is its location right opposite takeaway outlet The Kebab House- very tasty $45 Bryani for those 4am hunger pangs- and hugely popular late night Dance and snogging club Drop.

Located in a side alley, Drop is no dragon-i in that it doesn’t attract Hong Kong’s poseurs, big spenders, models and visiting celebrities. Drop is the weekend hangout for a fairly young and predominantly expat crowd hell bent on partying long and hard until around 7am.

Some of the sights we’ve seen over the years of these Droppers trying to find their way home is a sight rarely seen anywhere- girls falling over and down for the count, some idiot deciding they needed to climb the scaffolding of a nearby building at 5am, fights where curries and kebabs are thrown at each other and other examples of drunken Neanderthal behaviour that unfolds in front of you with surreal regularity. It might not be pretty to watch, but, hell, it’s part of a Hong Kong reported in almost salivating delight by The Sun in the UK about Hong Kong’s expat lifestyle- some expats, mostly those with too much time on their hands and s*** for brains- and where Lan Kwai Fong was unfairly singled out for this congregation of yobs. The reporter seemed to think Cochrane Street was Lan Kwai Fong, not that LKF these days isn’t without its fair share of problems.

In the midst of all this freakiness, we have met some of the most stunning and game-for-anything women by sitting outside Marouche and watching how life can often be a cabaret even without Liza Minelli around.

The sad news is that being another victim of spiralling rents, Marouche closes its doors later this year after fifteen years where it was a regular eatery for a number of well-known names in the racing fraternity like trainer David Oughton and his family, David Hayes, Mr and Mrs Douglas Whyte, a stop-off place for those wonderful Lithuanian and Latvian girls who worked at China City and Club BBoss- both clubs part of our Wolf of Wall Street years- and the restaurant always being an intoxicating melange of odds and sods and the heartbeat of Hong Kong with its very popular owner- Mr Sharma- acting as the Ringleader of the circus.

In fact, one night when our brains were fried, we dragged our Indian friend into a recording studio, plied him with copious amounts of alcohol and had him record this underrated masterpiece. Those were the days.

AND OFF WE GO TO SAI KUNG…

Speak to Douglas Whyte about how to get the most out of visiting Hong Kong during HKIR Week, and he’s sure to recommend taking in some of the city’s country parks, the various walks, the beaches not even known to locals, and, apart from grabbing a ferry or helicopter to lunch at the plethora of excellent restaurants that have opened in Macau almost overnight to take advantage of the casino boom that has, just as quickly, hit a brick wall, the champion jockey is certain to recommend discovering the new restaurants that have sprung up quietly in Sai Kung in the New Territories- easy access via the extremely convenient MTR or by cabbing it- and others that have been longtime favourites of many.

When most think of Sai Kung, it’s to head straight for the waterfront strip of seafood restaurants. Locals, however, tend to regard these as tourist traps, very similar to the restaurants on outlying islands like Lamma- not to say that these are bad, whereas getting on a private boat and getting out of Hong Kong with a group of friends is always great fun. But if you’ve done this once, the novelty is gone.

In recent years, like Coloane in Macau, a small, select dining scene catering to varied tastes has opened up in Sai Kung just behind the beachfront restaurants where, if hungry for that spice of life and not steamed prawns and garoupa, take a stroll through the narrow alleys of the area’s old town, just off the car park next to the Tin Hau Temple to Hoi Pong Street.

Ban Thai (tel: 2882 9189), which opened a year ago at 5 Hoi Pong Street, is notable for reliable food and friendly service, but AJ’s Sri Lankan Cuisine (Tel: 2792 2555 / Address: G/F, 14 Sai Kung Hoi Pong Street, Sai Kung) is one of a kind- truly one of a kind in that it’s the only Sri Lankan restaurant in all of Hong Kong ever since the wonderful Sri Lankan Club in Wyndham Street closed its doors all those years ago. 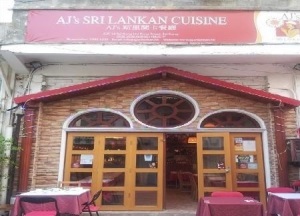 Run and owned by a Sri Lankan, this restaurant is the real deal serving lampris- rice with different curries, fricasees (meatballs), pol sambal, a chutney and baked in a banana leaf. This is a meal in itself and a dish influenced by the period during the 17th century when Sri Lanka was known as Ceylon and colonised by the Dutch.

Try this and the Sri Lankan street food favourite, string hoppers with a typical Chicken Curry washed down with a beer. Feel free to roll up your sleeves and go native by digging in with your fingers, mixing everything into little balls and feeding them into your mouth.

Yeah, we’re salivating writing this as no other spicy cuisine comes close to the tastes and variety of a Sri Lankan meal. And in Hong Kong, it can only be feasted on in Sai Kung- and well worth the trip out there.

THE MUSIC THANG: HOW TO GET THE MOST OUT OF HKIR WEEK (PART 5)‏