THE HKJC: MANAGING ITS TERRITORY

Many long-time Hong Kong Belongers will tell you that the Hong Kong Jockey Club runs the city. Others will tell you that the HKJC is more powerful than the government. And today at Shatin on October 1, China’s National Day, the sun shone, thousands were on track, television hosts commented on the horses, racing fans busily made their decisions about their choices for each race whereas all news of protesters that has occupied social media and filled television screens and newspapers for the past few days seemed a thing of a distant past, or a bad dream that never ever happened. 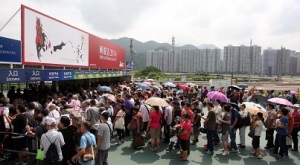 Yes, do anything you want- peacefully- block roads, hold sit-ins, play havoc with traffic routes, but, whatever you do, never mess with Hong Kong enjoying its favourite pastime- horse racing.

At today’s races, supporters of Joao Moreira, Hong Kong’s Most Popular Jockey, were out in force hoping the Brazilian would occupy centre stage by taking out the Jockey Challenge and winning the day’s major race on hot favourite Amber Sky.

Things didn’t go exactly according to script despite Moreira scraping through to win the the Jockey Challenge. Amber Sky failed to win the day’s Cup race and rained on his supporters parade.

That win and honour went to Jockey Of The Moment- Hong Kong’s Vincent Ho, who took out the National Day Cup aboard the David Hall-trained Bundle Of Joy, which absolutely demolished a very good group of young sprinters and looks like doing Hong Kong proud on the global stage.

If there was anything close to a protest, it was former Hong Kong Champion Jockey Dougie Whyte saying, “Whoa, there, don’t count me out” by riding a masterful double from a surprisingly measly six rides. 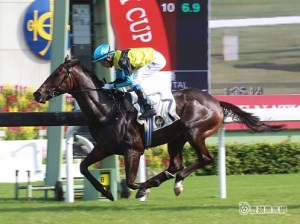 At a time when Hong Kong’s image as a peaceful, law-abiding city has taken a battering by a foreign media drinking from a half-empty glass, it’s not so far-fetched to believe that horse racing can help turn things around.

Yes, it’s a sport and, yes, it’s all about the thrill of winning- and winning that Big One, but horse racing is also part of Hong Kong’s lifestyle- a party where everyone is welcome and able to participate as a team on a well-managed level playing field.

This is where some of the naive and idealistic leaders of these various factions protesting today for supposed “universal suffrage” can learn- and they might learn the hard way- about managing their events so they’re not left leaving themselves open to opportunists with different agendas infiltrating their peaceful rallies.

Having banners quoting Lennon’s various messages of peace and love and singing songs is all very nice and noble. 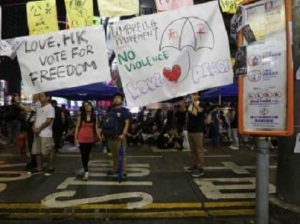 The problem is not having any fallback plans, no options, no risk management and no protection when uninvited guests crash this party and turn well-meaning intentions into tense situations that can easily spill over into war zones no one saw coming- and no one wishes to see happen.

Management, it all comes down to management in government, in business, in one’s personal life.

In its chosen field, the HKJC runs a very tight ship and manages its product and business very well- probably the best managers in Hong Kong of a product that’s much more than “gambling”.

Today, going against the mood of a city being torn apart by different factions, the HKJC managed to hold/organise a race meeting with great aplomb by having thought it through- by managing expectations, and by managing the situation.

If only others in this great city can see this- and learn from it.

3 Responses to THE HKJC: MANAGING ITS TERRITORY