HONG KONG JOCKEY CLUB SHOWS UP THE FAKIRS IN MUSIC

There’s something weirdly wonderful when a horse racing club does more for a musician- and he could be the start of many others- than those faked-out promises made by those organizing music events about performing to “some of the most influential names in the music industry etc etc”- for free, of course- and to which one must ask, “What influential names?” or, “And then what?” and “Have ANY acts benefitted from any of these appearances at ANY of these events?”

Apart from some unknowns coming up and saying, “Duuuudes, you were great!” or, “Duuuudes, it’s really happening in Mumbai”, nothing ever happens to fast-forward any careers at these music events- and they’re everywhere and inter-connected.

Wait: Forget fast-forwarding anything. Nothing happens at any of these meetings of legends in their own lunch times. It’s just the sound of the same old- and now older- boys and girls Minnie Mouse Club pissing in the wind.

Dudes, it’s always dudes and more dudes at these events who always turn out to be useless duds.

Despite the “bro” handshakes and the pointless ritual of exchanging name cards, these duds can make nothing happen other than add to the Uriah’s heap of has-beens, wannabes and never-be’s who, for reasons known only to them, wish to fawn over characters swept up in their self-important delusions and whose Use By Date has come and gone but are still there flogging the same dead horse.

This all came rushing back recently like a bad smell that refuses to leave when meeting up with an old friend after a year and listening to him talk about the same old usual suspects associated with music in Hong Kong- it’s the same throughout the region- we both realized how nothing has changed.

It was another numbing chorus of Joni Mitchell’s Circle Game. 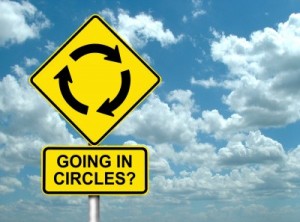 Meanwhile, thanks to the support- and vision- of the Hong Kong Jockey Club (HKJC), an unknown- and he really shouldn’t be- talented singer-songwriter from Wales has made a record, had it released through Universal Music, seen it top Hong Kong’s iTunes Download chart, performed at a black tie gala dinner for the biggest sponsor of horse racing in the world, met Simon Fuller, is featured regularly in a short-form reality series produced for the racing club, had music videos of the Club’s last two theme songs which he co-wrote screened in cinemas and was flown to and set up in this city to perform every Wednesday to over 10,000 people at the Happy Valley race course.

Ben Semmens is a happy boy and this has all happened without having to play for “some of the biggest names in the music industry”- for free.

To paraphrase the late Donna Summer, he works hard for the money and the dividends are paying off. 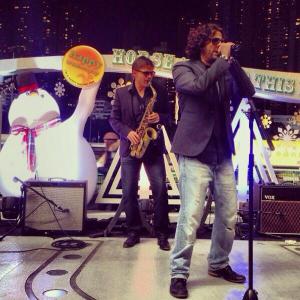 Gawd knows how and why it became de rigeur, but ANY artist should NEVER do anything for free- especially when it comes to giving away their art- and music is art, Sherlock- and falling for the bullshit of “You never know who might be listening so look at this as good promo.”

Nah, that’s all bollocks heard by everyone from Nokia to MTV Asia for way too long.

Instead of playing- for free- to many who have zero clout at some venues where very few listen to an unknown onstage, the HKJC offers musicians a ready-made audience in its Beer Garden and at the cooler venue that is Adrenaline- a hip, young, International audience relatively new to horse racing and at the track to have a fun night out. 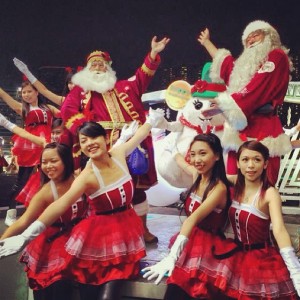 As for Ben Semmens, a band has been formed around him- top musos from around the world and based in Hong Kong including a young Chinese female drummer- Anna, pictured below- who will soon tour Australia with her own jazz group- he is building up a strong fan following with his weekly performances, social media through the HKJC is making him known, there are new recordings in the works- and not just recording for it all to fall on deaf ears- and with a proper marketing plan in place.

It beats the hell outta playing gigs in Cardiff and “making it” has happened not by hoping that “some of the most influential names in music” hear him and says, “SIGN HIM UP- NOW!”- and then what, anyway?- but by a horse racing club way ahead of the pack and which plays to its strengths- venues, two race tracks, a turnover averaging HK$1 BILLION every race day, sponsors and marketing to a very varied consumer group. 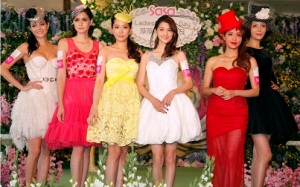 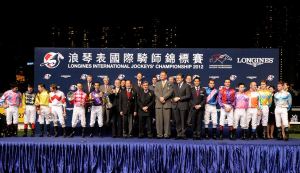 If only those pimping this “influential names in music” mantra took their blinkers off and broadened their horizons instead of making the same mewing sounds they have been doing for decades.

One really CAN teach old dogs new tricks- but only if they’re open to learning- and listening- about new partnerships and revenue generators other than downloads and streaming while swimming with sharks.