TEETAN, ANGLAND AND ALL THE BEST FROM EUROPE PLUS MOREIRA

The horses might not have been much, but on Happy Wednesday at Happy Valley, those 23,800 in attendance saw some brilliant rides with Karis Teetan and Tye Angland in starring roles and some strong cameos from Zac Purton and, er, Jacky Tong, below, and Ben So.

Make no mistake, both these local riders can get the job done when on decent chances whereas we’re tipping a good season for rookie trainer Chris So.

Teetan has taken to riding the tight Happy Valley racetrack like a fish takes to water and a parrot takes to Richard Gibson.

With a riding style that’s easy to pick up in a race, the moment the horses turned for home and the leader was trying to run the others off their feet, one could see that typical South African upper body strength pumping and pushing his ride- two and three deep- and gathering in the tearaway leaders.

Teetan had quickly summed up how the track was riding and rode according to script.

As for Tye Angland, who is very quickly proving he’s not underrated anymore and some “understudy”, his double saw two superb rides for John Size and Andreas Schutz who were not shy to sing his praises.

We’ve said it once and we’ll say it again, but we think its mad that Angland and, especially, Zac Purton are not riding at the Spring Festival- and on horses with real chances. 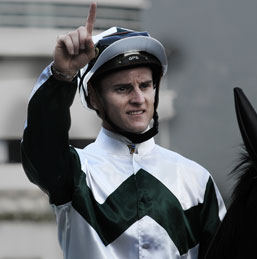 The triumvirate of Boss, Williams and Ollie is not a holy one, but one can only guess that in Oz, absence doesn’t make the heart grow fonder and owners and trainers have short memories.

Back to Hong Kong, racing enthusiasts will soon have a buffet of International racing when the riding ranks will include Joao Moreira, yes, but also Maxime Guyon, the very popular young Umberto Rispoli, below, plus an outside chance of seeing the mercurial and, sometimes, peculiar Christophe Soumillon. 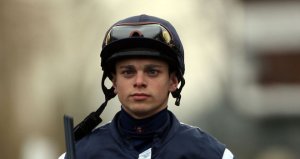 This is when competition will be at its most fierce with the relentless pursuits of rides beginning in earnest and jockeys with such contrasting styles battling it out for supremacy.

And could Hong Kong be also seeing recent Arc winner- the amazing Treve- in December?

We wouldn’t bet against it.