THE FALL AND RISE OF RACE 2 AT HAPPY VALLEY 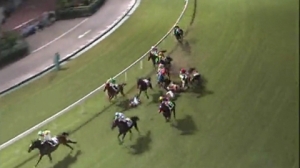 The horrific pile up during race 2 at Happy Valley last night has been well-documented and all the jockeys involved are lucky to have got away with what they did.

The falls could have been far more serious and it reminded some and showed others what a dangerous sport horse racing is and just how damn resilient jockeys are.

Watching the faces of the other jockeys who escaped the melee, the trainers, the racing officials, and the owners, mafoos, friends and family, there was no hiding their concern for all those involved.

As the Trackside team did a great job to give us news about how those involved in the fall were doing- and who were just as shaken up as all of us there- it was incredibly moving to see Caspar Fownes rush onto the track to see how his apprentice and bloody good kid Vincent Ho was doing. Forget formalities. One of his family was hurt.

Even more moving was seeing Tye Angland, who was part of the fall, move towards Dougie Whyte who looked to be unconscious and undo the chin-strap on his helmet to help him breathe easier. It was an instinctive, unselfish thing to do. It was heroic.

Gone were the politics and pettiness. This was the racing community coming together as one.

This wasn’t second-hand “reportage” from those overseas racing pundits who were thousands of miles away, watching their television sets and tweeting hearsay at a time when those actually on-track were trying to understand what was going on.

That type of overseas twittering and trying hard to be part of “exclusives” was rubbished by many in Hong Kong as being fake as more and more information was received and the night finally took on some semblance of normality.

Sometimes- and sadly- it takes a gut-wrenchingly awful incident like this for racing fans to understand that here are some of the toughest athletes in the world- physically and mentally- who, despite the on-course competitiveness, care about their fellow riders and have that incredible ability to bounce back a few days later, get on those wonderful thousand pound animals again and compete without every thinking about what could have been, might have been or did actually take place.

Who were the real winners last night? The racing community and we can all learn much from them.

Last night, many of us grew up a little more, appreciated friendships and, perhaps, became better people.